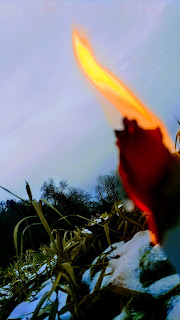 Some must reach the depths of their hell before finding themselves. Before realizing the gift that is life. Some must fill the burning of brimstone beneath their hearts and the piercing of their soul before leaping into the actions of it.

Some become so damned in their own skin they feel as if all hope is drained. That hell has consumed all breath and all that lay before them is misery and darkness.

But in this vacancy of hope, many find faith. Many find the beaming light that sits atop their mountains of freedom. Looking up with discern but feeling the grace that bleeds from these lights. And in the flowing of misery, they take their first step.

They lift their heavy soul and reach just a little further. And though their mountains towering in their presence. A sliver of promise falls into their heart and integrates into its rhythm. A promise of life, a promise that there is more to them than their suffering.

That the shadows that follow them are not all that is to be. That at the top of these vast mountains, lies an abundance of passion, of hope, of absolution from all that dwells within.

And in their first step, comes the strength for another. And though each step may feel as if they are meaningless, they find thought, that it is not this step. That it may be in the forcing of another step, they will find themselves.

For in the climbing of their mountains, they see behind them their decaying past. That many rotted roots must be severed from their blood to move on. That shadows hold like the falling of another, pleading to be rescued. But only lies seethe from their teeth and corruption thrives in their guts.

And as they take each step, releasing a bit of themselves from a shadow and carving their blood from wasted roots. They see the courage, the vitality, the substance of self. They see the darkness before them crack, allowing light to flow. They see the emptiness that coats them become diffused from their soul.

They feel the beat of their heart become mighty in its rhythm. Playing a beat they believed to be forgotten, to have been lost in the hell that devoured their once magnification heart. They find purity in their soul they believed to have drowned in the mud of affliction, of regret, and woe.

And though this struggle to be free, may bring much pain, much sleepless nights and the lose of what is known. They find that with each new step, closer and closer to the top of their mountains. They find each new step to bring a great view, they feel the air to bring life. They feel themselves become something more of what they want.

No longer crowded in disparaging thoughts. Finding themselves empowered by the sacrifices they have made in the climbing of their freedom. And though the paths of the mountains are harsh in their nature, their is new breath to be consumed, new hope, new thought, and new blood.

Some do not find the courage to tear down the old and journey to the new, till their backs are bleeding against their own wall.
--

Thank you for reading, if you enjoyed this please allow your soul to read,
A Man's Traveled Heart