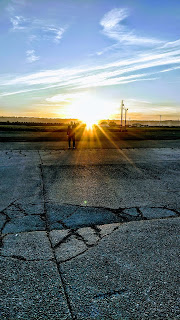 Still looking for a Christmas gift?
A Man's Traveled Heart

Today, she can smile, she can laugh, she can open her eyes at last. She can feel the sensation of life once again. She can dance to the music she grew up to. She can now smell the brisk air that hovers in the hand of fall. She can enjoy the colors that sweep the earth like a wild brush left with no intent to stop.

She can once again feel alive in the presence of herself. No longer does she lay dormant to the aches of sickness. To the loathing pains of remedy, to needle and flesh. No more curling of the gut and the rejection of medicine. She can sit with eyes poured in tears of joy, not misery.

No more does death ladle her it in its wings. Grinning with rotted teeth and a tongue of black. No more inhaling the stench of this cold building, of frosted souls that lay only wishing for death. No more does she find herself haunted in the breath of dying. Of withering to the unfortunate toils of disease. Lingering at the edge of her grave, praying with melancholy eyes.

Her lungs fill no more with her last breaths. No longer feeling the pity others bleed upon her as if there was no chance of triumph. But in the suffering of it all, she held to a sliver of light. Sewing it, to the faith of each beat that came with each new day.

For with each rising sun, she knew her life was not done. That the moon would soon present itself among the crowded galaxy. And each star sang for her, as each cloud in the sun danced for her.

The whole world was waiting. Anxiously biting its nails for the moment for her to rise. To conquer the battle at her heart. Swinging her mighty blade at each soldier death would send. Casting them back to the depths from which they came.

Finding solace in the simplest of achievements. Even the mere action to conversant with others as wretched pain would knock with no concern to her dying heart. Was a moment of great success that would be praised before rest. Pain that would call out her name to quit, to collapse to the agony that wished her dead.

But she was no victim to the misfortunate. She was the hero of her heart, of her story, her chapters, her book. And each moment she was able to breathe, she was grateful. Unyielding to the critics that scripted inside her mind.

Many times, did she watch as other faltered to the suffering. To closing their book and releasing their pen. Allowing their ink to dry and become nothing but a forgotten imprint upon themselves. To be left to these empty, dreadful cold halls. And she, was no causality to the world. She is a fighter, a queen of her kingdom, within her soul. And no illness, no demon, no devil, no hell was going to take it from her.

And today, on this day, in this miracle of life, she has won the war against cancer.

----
Thank you for reading, want more?! Then grab a copy of A Man's Traveled Heart 💓