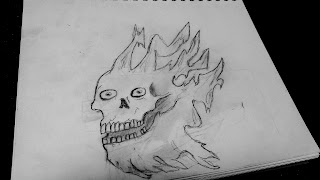 
The world is gone, not a single structure stands as it did before. Sands from far away lands, now rest here as if is to be their home. Cultures of others cleansed in the name of these sands. Deserted like the desert, threads of architecture split from the ground like slivers.

Ashes cover the skies, the smell of burning flesh and gun powder enthrall the senses in disgust. Food is scarce, the weather, fickle against the black blind of clouds. It is a carnivorous scene, it looks as if the devil had kissed the earth.

Screams from the distance echo through empty city streets. Filling the ears of those alone with much doubt, much horror. Feral beasts feast upon the dead with wild insatiable hunger. No communication but that of face to face and hand delivered letters is all that exists. Flames burn constant from the expulsion of oil from the earth.

Families fear death as putrid souls gather in haste to take control. Pillaging the weak, murdering the strong, and kidnapping the beautiful. The sun fights the dark horizon, but there is no surrender from the apocalyptic scene.

Children, scattered from families like forgotten orphans. They wander the alleys in search of comfort, but are poorly left to the cold ways of the damned. Searching through trash, debris, and empty homes. Their stomachs stretched by the hurt of hunger. Their guts, twisted in agony, but no tears are in grasp, as thirst has consumed their bodies.

Mothers sit in tears as many have watched their family slaughtered by this massacre. By the carnage of what few had seen coming. Though, endless tales of this have been spoken through life, as old as time.

But ignorance filled the lungs of the world. Lies became the truth, flesh became a god, and hell, hell became a tale of fiction.

And now, now the world sits, charred by the hateful whispers of the malevolent, of the wicked. Piercing through the cracks of empathy like slime. Fluttering through the streets in harsh tongues, forcing the thoughts of others to be commitment of heresy.

Enough fell prey to the vile convulsions of revenge, of loathing, of resentment and darkened skies.

Now the cities sleep with no music, no drink, no merry cheers of friends or family. Silence of emotionless hell canvasses the air. Drawing thick to the lungs, depleting smiles as if they are a disease.

Country sides, torn like the destruction of a thousands winds. Islands, sunk as if they never existed. Fathers, forced in watching the murder of their families. Sons, forced in the witness of ravaged sisters, mothers, and neighbors. Daughters, slaughtered as if nothing more than an item of the past. Forced into the unholy actions brought upon them, all in the name of what they do not praise, do not follow.

Heads roll in the streets in execution of defecting against what is. Fools follow in selfish tides of misery, pitying themselves till they tear no more. And with no rejection toward the actions of that which they follow, they gladly bleed others to breathe the air they once said was corrupt.

And now, they have reaped what they sewed. And in the thoughts of no hell, of no evil, that all can be forgiven, that all seek peace, that empathy is the only means of understanding. We have brought hell to the doorsteps of our homes.

And now, we must find heaven among all this.
---
Thank you for reading, of you find excitement in what I write, then grab yourself a copy of.
A Man's Traveled Heart