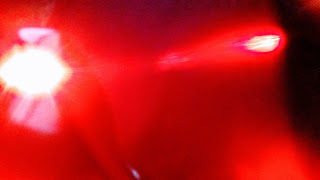 I woke drenched in sweat, my eyes wide with fear. I turned to the mirror at the edge of my bed and my eyes were black. Looking as if two pearls had replaced where my eyes once were.  My chest began to feel heavy, it ached, it felt as a knife was prying my heart from my ribs.

And I has held my hands to my chest while trying to catch my breath, what was already dark, became darker. My room became a shelter for the deepest shades of black. Not even shadows of my own self could be seen. My blinds became a solid wall, no light found its way into any corners of my room. The door became a black void.

I could feel a cold breeze come drifting from it. The hairs on the back of my neck stood up. Goosebumps crowded my skin, and my breath became visible. My mind rushed in this unexplained phenonmenon. Everything about me, was not me, my skin turned pale as snow.

I felt as if I was dying, as if something was taking my body. And just as I was about to rush from my bed. A dark figure came walking from the void that enveloped my door. And as it approached I could feel a dark energy, evil melted from its presence like hot breathe.

Its hand reached through the void and it pulled itself into my room. And with no explanation everything about what I saw became surreal. My room became a vast space of stars, of burning flames. But strangely it was cold. There was no ground to be seen, I was floating among what seemed to be another dimension.

And as my eyes spread wider than they ever had. I looked over at the dark figure and there it stood. It was a giant, standing ten times my size. It wore what appeared to be black lighting, but it rippled to the wind as if made of clothe. Its face held hidden beneath a hood, but no eyes were visible. Instead,  smoke rolled from from the cavity of is head.

And as I watched in fear it began to talk, but it did not talk in one voice. It talked, as if it were many voices, as if a crowd were whispering into my ears. Some, speaking out in ill tones toward some, some seeking help, others, were distance screams, echoes in my head.

The more I listened the louder the voices became. I yelled to the voices to stop as I looked up at the ghastly figure. But as the voices became more violent in their their language. The deathly figure grew larger. Thunder roared from his cloak and the smoke from his face, billowed even more.

Soon, the smoke chocked my lungs and the voices pierced my ears. I could feel something warm tickling the sides of my head. And when I removed my hands from my ears. Blood covered my hands. I could hear no more, but I could hear the voices gnawing at the inside of my mind.

Whispering, screaming, shrieking in hellish tones. The flames around me became hotter, it felt as if my flesh was burning. And as the darkened figure reached for me.

I awoke, covered in porous swear, still to this day I wonder. Was it a dream or a reality of what is beyond us?
---

Hope you enjoyed this, have you ever had dreams that later you thought could have happened?