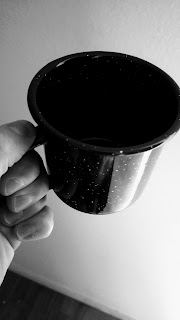 The sound of water flows from a single point. Fingers from an early morning rise find themselves delve into the flowing water. The water rushes upon the fingers like a flood. With no anticipation to stop the water falls in perfect harmony upon the skin. Caressing the flesh as it is resisted to stay. Falling quickly to the basin of its now new home.

As water rushes the fingers adjust to the rising temperature of the tempered water. As the water rises in heat. The fingers are removed from beneath the translucent life, the fingers glide back from the pouring of water. Gently the fingers clasp upon glass, raising it from a cold, silent, ivory surface.

The air is brisk, silently collective with the smells morning dew and the crisp fall. The glass and fingers united, find themselves carefully placed beneath the now misting water. The water now falls with no remorse into the belly of glass as the fingers continue to hold it steady. The glass grows clouded as heat fatally is trapped in the core of the glass. Droplets of water condense to the clear surface that is glass. As if to wish for escape, but desperately they fail, clinging to the sides with no hope as the water rises in haste.

Suddenly, as the rushing water fills the foundation of the glass and the fingers hold with keen grip. The water vanishes with no words of intent. Silence overwhelms the moment as the still brisk air is all that seems to speak.

Now, the fingers remove the glass from the home of the once rushing water. The glass is guided with much power with no resistance to its next destination. But upon the guidance of the fingers, a second set of fingers appear with no earlier presence applied.

Now the glass is between two unforgiving creatures of flesh. The glass is bellowing with water, the other set of fingers push open a lid to a strange contraption. Beneath the lid is nothing but darkness, a glowing red eye peers from a strange machine that seems to the beholder of the abyss.

Suddenly the fingers that hold the glass, which endures the heated water. Is slowly tilted over the somber abyss that occupies beneath the once closed thin door. The water begins to fall from the belly of the glass and beautifully falls with impeccable perfection. Falling with ease like clouds surging over mountain tops.

As the water falls with steady flow, the fingers with no glass begin to press upon the machine with surgical precision. Strange excited tones response upon each press. Suddenly the peering red eye blinks, upon the open of its eye upon the blink. It now stares with a yellow eye.

Upon the now glowing yellow eye. The water has now vanished to the abyss beneath the lid. The glass now is held empty, with residue of the once rushing elixir. Now, with no warning the fingers that hold the glass intently place the glass inside the mouth of the machine.

The lid upon the monstrous machine is slapped closed from the now anxious fingers. As the glass sits in the mouth of the machine. The machine starts to grumble like a hungry troll beneath a bridge. The sound of boiling fluid starts to roar from the innards of the machine.

The glass sits still, with no possibility of escape. The machine grows silent for moment, peace may be at hand. But no, the machine begins to spew brown steaming bile from its gut. The once clear glass that patiently filled with water. Is now the storage for this machines rejected contents. The glass in silence, elects to hold this vulgar contents with no choice.

An hour flows by as the horrific bile fills the glass till the belly of the beast grows calm. Now the glass is no longer a translucent beauty. But a repugnant glass of steaming bile. Minutes pass upon the completion of the glasses duty. The fingers return and grasp upon the glass with elation.

The still brisk air, is now consumed with swelling scent of the secreted bile of the monstrous machine. The fingers holding the glass begin to pour the bile into a new container, a thick well rounded white container, which stands a quarter the size of the glass.

With no reasoning, upon the filling of the new container, the fingers replace the glass in the mouth of the beast and disappear with well rounded one.

Thank you for reading! Did you enjoy this?! Then grab a copy of A Man's Traveled Heart