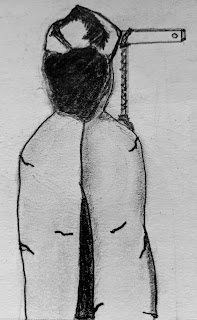 
"Forgive me, forgive me!" James cries out as she dissolves from his view like a ghost to the tales of a story. His tears, as sorrowed as the death of love. He reaches out as his steps become heavy, but she is too far and his heart is too heavy.

"Why do you say nothing, why leave me like this...whyyyyyy?!" He bellows as not even a breath is heard from her lungs. Her steps as subtle as a stroll against a lake. His eyes as wallowed as a raging ocean.

His knees compressed to the paved road. She, as distant as a star, so bright yet far from anyone's embrace. He is lost for words now as he begins to feel clutched by a cold gritty grasp. He lays knelt in his pain as a brisk breath falls upon him.

Wafting across his exposed neck, the hairs upon his skin stand with tingling fright. His bones begin to shiver and skin turns to grey. And from the frightening feel he turns his head toward the cold. And as he peers, there before him stands a figure dressed in a black cloak.

Its face hidden in the depth of a void. Its breath forming like mist as blackened tears fall from the forming cold. Shattering upon the rigid black road. And James, tearing from his eyes tries to speak. But his voice is silent.

He begins to panic, he becomes frantic. His eyes to the cloaked void he grasps to the figures garb. Pleading in silence for help. But there is no response but the silent raising of a scythe. Dark clouds form, rolling about the sky like tumbling boulders.

James eyes dilate in horror but his heart is silent. He fixates upon the well edged scythe, its blade stained in blood. Its silver splendor curves so frightfully, yet elegantly. Screams echo from the faceless figure. And James, he tries to resist. He tries to reach to the heavens.

But his body bears too much weight. The earth has been placed upon him. Death stands before his face and the gust of the damned reaps upon his soul. Grasping with madness to the cloaked figure as tears repel like falling soldiers, James idles back from the scythe to the faceless void.

But there is no response. Only the frozen grasp of death. He tries again and again, pleading like a beggar upon the streets. But with no prevail, James becomes hopeless. He feels himself shrink to a pitiful existence.

He feels the darkness of his wrong encroach upon his throat. He releases his hands from the cloak, his tears cease. His eyes become pale moons and his tongue shrivels to dust. His jaw weakens and  hangs like the gaping mouth of a fish.

But he is granted posture, the ability to stand. And from such gift he turns away from the scythe and the faceless figure and begins walk. But as he does a heavy wind rushes upon him. Forcing itself against him.

But he panders in resistance with his pale eyes, his gaping mouth and grey flesh. He presses against the wind with every effort, as groans of weeping sorrow escape his thirsting throat. He keeps trying and trying but not a single step of advance is made.

Hour after hour spreads before him. But time has lost him and suffering has found him. And she, his distant star fades to the curving earth. But just before she is taken from his view, she turns and her face is sullied.

Coated in tears of deep and conflicting emotion. Her face shimmers against the hazing light of the falling sun. James tries to call out, but only groans of agony breach from his mouth. And as he forces himself against the wind, she speaks out to the open void of the road before her, staring to the home where their love was first met. And with great mourning and outrage she says,

"Why....why did you do this to yourself, why did you do this to us? Why did you kill yourself? I thought... shared it all, I thought...we shared it all? I thought we knew each other? But I guess I was wrong. I guess I was not the love you wanted.....I guess...I was nothing to you, for now you leave me with this. With nothing but suffering, nothing but the sour taste of lies. The bitterness of hate and the ever grasping of lonely misery and the forever question of why?"

Her words echo through the wind, piercing the ears of James. Forcing blood from the canals of his skull as shrilling pain shocks him from nerve to nerve. But he can neither cry nor speak, he cannot walk forward, nor see life. He is now taken by death, forever spending time against the wind with his gaping mouth as his suffering becomes the suffering of those he loved and those who loved him.

Feeling his body take to the weight of a broken heart and an eternal mistake. Seeing his love fade at his own hands like spit beneath summer heat. He crumbles to the raging wind. His body falls upon the road. He closes his eyes and for a moment feels relief.

But in his brief drop of relief, it is interrupted by hell. And a hand of sickly shade, dripping with blood, accompanied by a crooked imp of sharp teeth and yellow tongue,  hoists him to his feet. He tries to fight back, but the foul creatures strikes him with a burning whip.

And for eons to come, even upon the absence of the earth. He shall wander without change. Forever, in the madness, of his eternal mistake.
--
How do you look at suicide?
Through my experiences, I have found it to be a distasteful surrender and give no meaning to what one used to be.

We are the heart we give ourselves,  Man's Traveled Heart
Coming soon, The Bleeding of Words