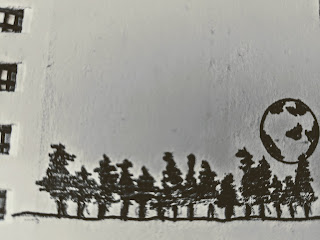 I swear I saw her, the maiden of the lake. I saw her on a late night walk as I passed behind a distant row of trees. My heart beat irregular that night. Something pulled my eyes toward the glimmering lake, I remember vividly.

The night was brisk, the stars shimmered from the sky as their light laid upon the lake like cream. Glittering to the gentle waves created by the oh so bitter wind. My hands rested stiffly in my pockets as I tried to keep warm.

My thoughts were lonely, a cold crisp pattern of thinking yanked my already stressed mind. But as I was walking, battling the torment of my thoughts. The odd sense to veer my eyes toward the mirroring lake led me to see her. To witness the magic I have only heard of.

It was surreal, nothing could have accounted for a more brilliant and magical moment. It was beautiful, a captivating wonder. Nothing could describe what I saw, a woman fair of everything. A woman so vivid of color, of presence, the slumbering flowers that surrounded the lake bloomed.

They blossomed with such elegance. Their necks stretched like eager children toward the aroma of sweets. They turned following the maiden with careful motion. They followed her as they would follow the sun. The water beneath her feet held her as if it were glass. Her hair pursued the wind. And oh was it beautiful, it was as if it were painted.

Splashed with colors, an artists madness upon her hair. An expression of beauty that could only be expressed in a geyser of color. There was no one hue that stood out more than the other. The colors harmonized with such, such magnificence.

Oh how I adored the multitude of her hair. I was lost in it and the moon only gave it more grace. And dare I speak of her skin as I peered with allure from the shadows of the trees. My breath delicately displaying the frosty air.

It was breath taking, a tantalizing pleasure to observe. If only to touch it, oh how unfitting I be for such fairness. It glistened like moonlight, dripping with visual succulence like the sun falling to a sinking horizon. Like sorbet falling from lips in the summer heat.

I could not advert my eyes, her hair wrapped about her body like loving hands. My heart was excited, pouncing at every step she took. Mesmerized like a school boy fool I kept watching. Lingering with awe.

And at a moment, I swore she had seen me. She had turned her eyes toward my attentive presence. Ah! What stunning brilliance they were, stars, stars trapped upon her face. Sparkling with waves of silk, shimmering so softly to the darkness of the night.

I was lost, lost in her. There is nothing I knew of her but of now. No voice, no name, no story but the one that unfolded before me and the childish tale I was told. And as I looked to her eyes from the short distance between the waving trees.

She had vanished upon our moment. For I swear we looked to each other as if captivated by one another. As if their was something more than my gaze wandering her body. Never had my heart felt such a thing. The emotion, the elation of her left me joyful, yet saddened.

For when would I ever see her again and if I do, will she be more than just a walking wonder? Or will I be graced with her hand or at least her voice as I peer from the trees?
--
Who has caught your eyes so deeply you had to meet again?

It is now or never for the heart is only beating closer to death, A Man's Traveled Heart

There is more to be seen,