Round Table of Greed 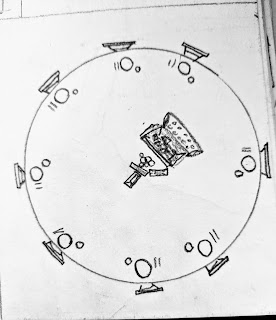 A Round Table Greed

I have found myself as mad as the Tell-Tale Heart. I see them and I want to silence their grovelling. Their incessant need to banter about their virtuous tongues. How mighty they talk as they sip the most expensive brandy in the city.

How well their words be versed from their academic life. S  compelling, so persuasive you just might believe them. But I see it, I see their greedy eyes dart to each to others extravagance. Each talking up themselves up like children.

Oh how trivial all this be. How dull their senses must be. Their egos inflate with each sip of brandy as their character loosens like a whore through out the night. I wish to deal great death to them, maybe poison their drinks or.....or cut out their hearts one by one forcing each to watch.

Ha, how glorious it would be, to feel their warm hearts die in the grip of my hand as the blade  lay flush upon their now silent chests. Oh, but if I be this mad, surely they notice. Surely they see my eye twitch with annoyance as I pour their drinks so eagerly.

Get drunk, drunk I say, let your ambitions slide, let yourselves become as thoughtful as a cat is to its prey. Play among each other, stringing lines of lies of who is better, who has done more for their world, their city, their state, their people.

How I loathe these echoing voices. Do they not hear themselves, do they not look out their windows and bare eye to the streets? Have they not heard their people begging for better dreams? No, for they are too full of themselves, their narcissism has severed them from reality, as to say each is right in their own.

Each would gladly take a knife to the others back if they could get away with it. And they have, I have seen their groups shift and shape like the winds. One minute you have a man speaking openly against corrupt ideas and the next day, he is gone.

Not a word nor a single mark left in papers. "They resigned," they answer me each time. Four times this has happened in the past three years. What sick ignorance and greed do they feast upon? Each raising their glass to their lips with pompous looks, scoffing with frothing pride.

They have demolished the living will of their people by the simple task to look well upon thought, but not upon action. Bringing no results, no solutions to the table. But they speak so well of great things, they spin lie after lie like an addict itching. But well be their followers for they are broke, weak, and young minded.

How easily they follow as these round table fools speak of greed that their enemy posses. Yet here they be, well over millions upon this table, maybe even billions. Yet, they are but politicians. Are they not scrutinized from where they generate wealth? Or have we turned a blind eye for the mere sake of fearing the truth? Or the possible loss of power of ones side?

Oh how my heart cringes with each curve of their lips as words of boisterous promises seethe from their throats like puss. How unsightly they be, their port bellied figures and those frail in bones as age and poor habits have taken. Their skin pulling toward the earth like sludge.

Their eyes glazed with a madness only insanity can explain. Sickly be their intentions but I am forced with sewn lips of a legal sense. I can speak nothing of what they say, oh but I can plot their end.

Or so I wish. My head pounding with an ache, I cannot take much more of this. Drink, drink you fools, till your words are slurred and your tongues dangle with your ego. Spurting out nonsense and the plots to turn on one another.

How delightful it would be, it would be like watching rabid dogs fight among a single piece of meat. Their teeth gouging into each other so madly they forget their purpose and ignore the succulence of substance.

How great, how spectacular such a sight would be. Maybe then, maybe then we can be people of peace. No, I must keep my urges to myself, oh! But how bad I wish to act upon these primal urges. Like apes looking to conquer, keep silent you weak fools!

Did I say that at loud? I look to the table of gluttonous fools, but none are looking to me. They are too busy laughing and hating amongst each other through sarcastic chit chat and taunts. Uhg, how clearly I can feel their slime thicken the air.

My throat has become parched and my head, how painful it be now. Their breath seeps with the wafting aroma of brandy, rich stakes, and cigars. I am disgusted by their manners, if only they had any. I see now, they are becoming drunk, quite drunk I might say.

I walk up to the most callous one their, her face like a skeleton, thin, tormented by a mountain of lies she has hidden behind a crumbling wall. I ask, if she would like another drink, she denies me. But with much anger, she tosses up her hand forcefully knocking the bottle of brandy upon the floor.

She screams out, "Clean that up boy, that is what you are here for right?! To be our errand boy...well, answer me boy! Am I wrong to say such a thing?!" Too drunk to be stable, she crosses her arms as her head tilts to her shoulder and her chin tucked to her chest.

Bending down with a towel in my hand I look up with eyes of burning animosity but reply respectfully, "Yes ma'm."

She bears her drunken eyes down upon me and says, "Good, now clean that up and get us a fresh bottle, oh, and some cigarettes." She lifts her glass of brandy and polishes off the last bit.

Walking down the hall I hear my heart palpitate with stress as their voices play out in my head. But as I near the dining room door, I hear silence. At first I am confused but then smile, as maybe they have left.

I carefully approach the door with caution and push it open. I step in with brandy and cigarettes in hand and there they are. Silent, each one of them passed out from the overindulgence of brandy. I look about them and bite my bottom lip firmly as I shake my head in irritation and disgust.

I see one of them has a cigarette hanging from his mouth, which is still lit. Looking to the fat man passed out with the cigarette, I form a crooked grin and think. Maybe the cigarette will burn all night and catch this room ablaze? Trapping them all in a chamber of flames.

I could stand on the other side of the door and listen in joy. It wouldn't be my fault. I Could simply say I left to retrieve their requests and came back and the room was on fire. Ha, I could get away with it and not feel the least bit terrible, or would I?

I place the cigarette and brandy on the table. I turn around and start to walk out but as I do, I stop and start to think. I start to feel a little sorry for the unworthy fools. They are merely lost souls, they may not deserve life, but it is not my choice as to how much life they get.

Turning back around I whisper to myself, why, why do I have to be this way? Could I not be driven mad enough to let them die, why does my conscience fight me so?

Looking to them I start to see they have none, they have no conscience. I think, maybe they are mad, true madness like an ill king upon a throne? Driven by paranoia and greed. What ever be there reason for their poor or rather, lack of character, it is not me who shall bring them to their knees.

So I pluck the cigarette from the ungrateful pig of a man and put it out in his brandy. Leaving the room just before the door, he wakes up throws his arm in the air and shouts, "Boy! Why would you spoil my brandy by putting a cigarette in it?! Get me a fresh glass and send me your boss, you shall surely pay for this."

My head boils with anger and just as I am about to speak, he passes out. His head instantly slouches into his billowing belly, or maybe chest. I cannot tell, but he falls asleep. I leave with a smile upon my face, for it won't be I who has to clean up this mess, but the morning crew.
--
There are those who run off of greed and speak with silver tongues. They will grant promises that cannot be met and they will hate those who keep to theirs and those that have more than them. We must be aware of who we give attention to and power too. There is no one side that should be the all say.

Do not let your mind react through emotion,  A Man's Traveled Heart