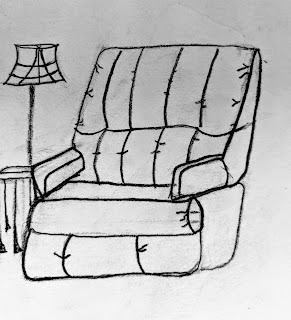 
Another day at the hands of hard labor. His heart loved, but his body trembling with exhaustion. Age is finding home inside his brittle bones as pride takes his logic. His hands as calloused as his first years. His body, ruffled by the heat of the sun.

His eyes embellished by the circling of darkness, the perching of crows. His hair, as ghostly as the morning mist. His face, worn, with years of dust, dirt, and grim. But his smile still remains, his heart still beats as if sixteen.

Jasper, opening the door to his lodge house that sits dead center upon his land. Steps inside and removes his boots. Holding each in one hand he turns to the opened door and clacks the boots together. Clouds of dust waft from the bottom of his boots. Chunks of mud fall to the heavy vibrations of the repetitive collision.

With the boots cleared, he places them to the left of the door just inside. Jasper turns to the door and shuts it. Turning back toward the house he smiles with a sigh of relief. He removes himself from the the door mat and walks to the kitchen.

On his way to the kitchen hes pats the dust off his red and black flannel. His blue jeans are crusted in mud from the ankle up. But he pays it no mind and while stepping to the kitchen he heads for the fridge. His rough right hand grasps the handle of the fridge and opens it.

An instant dim yellow light flickers as it opens. He looks inside for a moment and grabs a beer with his other hand. The cold glass bottle soothes his tired hand. The brisk feel travels up his arm and into his mind.

It is quite the relief after a humid day in the dead of summer. Jasper takes the beer and swiftly cracks open the lid. He takes a sip and as he does he hears a voice,

"When are you going to replace the light Jasper."

Jasper, facing toward the fridge response as he begins to turn around, "I'll replace it tomorrow Ann....." Fully turned from the fridge he looks toward the exit of the kitchen from where the voice came.

But there is no one there. A sudden somber feel takes hold of Jasper. At the same time the setting sun glares through his home with a soft golden light. Particles of dust float about like stars. Jasper's fatigued face catches the sun just crossing at a angle over one side of his face.

Looking to an empty door frame, Jasper turns his lips tightly inward and slowly gasps through his nose a solemn sigh. His hand still holding the beer, he brings it to his lips and takes a sip. For another moment or two he stairs in the void of his home.

Looking through the kitchen to the living room. A couch and a large recliner sit idle. Between them is a small standing table, with nothing on top but two coasters. Jasper, looking to the living room decides to make his way there.

He closes the fridge, exits the kitchen and walks next to the recliner. Its dark leather exterior, clearly used for many years, sits there with memories trickling from it like a faucet not completely turned. For a minute or two Jasper looks at the chair while sipping his beer.

The sun has now dissolved to the horizon. The stars now shine and the moon beams with a delicate glow as it seeps through the windows of Jasper's home. After sailing gently through his memories he walks over to the couch, its an old black leather couch just as worn as the recliner.

There are creases and cracks, each with memories flooding from them. A few more sips of his beer and walks back over to the recliner and beside it is a large lamp that stands behind the small table. He leans over and turns the light on. The short string of metal sways after he plucks it to ignite the lamp.

With the lamp on, the moonlight is stricken by the embrace of the lamp. It now skirts the dimness that surrounds just outside the reach of the lamp. With the living room lit and beer in hand, Jasper sits down in the recliner. He places his beer on the coaster to his right and raises the leg rest of the chair.

Not a sound is made as he corrects himself into comfort. He swipes his brow with the sleeve of his shirt and picks up his beer. He starts to drink it, taking sips every few moments. His eyes draw to a single spot in the room as the TV remains silent as the remote sits on the arm of the chair.

Taking sips of his beer Jasper stares at a single focal point of the room. He looks to a picture sitting above the TV upon a hand crafted shelf his wife Ann had made. Looking at the picture he smiles gently as his heart buoys to the waving emotions beneath his chest.

His eyes soft to the glow of the lamp. His eyes turn red as he fights a tide of sorrow. But his ribs are caving, mollifying to the moment. He can bare it no more, his wife's graceful smiles breaches his hardened stride.

Jasper places down his beer and begins to cry, he steps up from the chair with a weeping heart. Walks over to the picture of his wife, carefully pulls it from the shelf and looks into her glowing eyes. A few tears land upon the photo.

He smears them with his thumb as he pictures her still next him. Her warm embrace holding him gently. Crying, Jasper places the photo back on the shelf and returns to the chair, he wipes away his tears and returns to silence.

He picks up his beer and sips it till his eyes can remain open no more. And in the morning he rises to the sun, clicks off the lamp and returns to the labors of his day.
--
We must be willing to labor, even when or hearts are heavy and we are surrounded by loss.

There can only be one of you, so there is no need to fit in, A Man's Traveled Heart