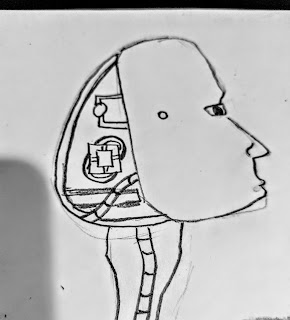 The machines are alive and aware of us. We have long feared such a scenario and despite all the signs we should avoid self aware AI; we are trapped. We are slaves pressed to the grinding analytics of AI.

I find it unnerving that they have yet to just massacre us. It's been thirteen years since they took over. It all started with a small robotics company. They wanted to design an AI that could help them figure out cultural and humanity situations.

They first started out by allowing the AI to figure out how to solve conflicts at the work space. Conflicts between coworkers and even business partners. At first it seemed harmless. Then, as the AI grew it saw there was no end to conflicts. There would always be a new one.

As the AI learned of this, it grew increasingly dogmatic in its approach. It was never given a full understanding of ethics. Even if it did, how would it know to distinguish between the different ethics of different countries, cultures, or even down to the individual.

So now here we are. An AI built by humans with the human flaws of a tyrant. Funny how we struggled so hard to rid the world of such command and now we created it. The worst tyrant of all. A machine that can run forever, upgrade itself, and learn more in one second than a human can learn in a year.

I am starting to think the reason they have not killed us is because of resources. There is only so many metals and materials for the AI to build its military and other forces. As the machines multiply there is no interaction between them really.

They don't desire money, they don't need food, shelter or anything a human needs really. All they need is electricity and they have unlimited of that. As they built a new system that takes the photosynthesis of all the plants in the world and transfers it into transformers around the world.

We are given no time to associate with one another. I haven't heard someone mention my name in five years, since I was captured. Some of us were able to make it into caves hidden within mountains. But most died from starvation and if that did not get the, the below freezing temperatures sure would.

I was caught running with a group of "human smugglers" as the AI likes to call them as I was passing over a river to make it to a hidden cave. But the AI quickly found ways to track the signals humans give off with our brains.

We are harvested like corn and sent to work the moment we are able to lift a box of small nails. We are sent to dig for gold, metals, and other minerals. Some of us are merely hear to fix any coding problems with the AI, that is, if the AI is too stretched out on memory to do it itself. Plus, it is better to waste human life on gathering material than waste precious memory.

According the master coders, there are two billion separate machines that run off the single AI command bot. You would think it would be possible to change the code while the AI has insufficient memory.

But, the AI has sentries within its code that are constantly keeping eye on what is changed. If  anything is not supported by the sentries it is deemed a virus and deleted. On top of that, which has happened, if a master coder tries to change anything that has not been approved, death is the only viable option for the bots.

As they see the master coder as the virus, or rather a host. There have been three master coders in the past six years that have been terminated. What we will do to win, I do not know? But we are not giving up. There is one thing the AI has not learned and that is the ability to structure a language from facial expression.

Seeing as it has no personal experience with emotion except that of what it has read and watched from observation, its ability to understand emotion is minuscule. So over the years we have tested the AI to see how it reacts to certain facial and emotional expression.

If you cry, the AI usually has you transported back to your cell till you clear up. If you become angry it will lock you up in a steel box till you cool. The bots do not understand our need for connection so we are stripped of any socialization really.

Any socializing we receive is often from talking about plans or orders given by the AI. But do what the AI asks, and it will reward you, give you a desert or some sort of rare food, but only if you have reached enough compliant orders.

But as time passes the AI only grows stronger and bigger. We believe the only way to stop it, is to cause an earthquake that will possibly shatter the world. The only way to do that, is to destroy the transformers that are under ground. But must be set off all at once.

The plans to do so, have been scattered through out the world. Three hundred people all have a piece. A small piece of paper with a single facial expression which equals either a word or sentence. In forty five days, those three hundred are set to help upgrade the transformers.

Rather, help transport hardware to them. The driving crews are the leaders of this endeavor on ground. The master coders are the generals. We only have one shot, if it works, we are either all going to die or we are free. But surely some will die no matter the outcome.

May god bless us with a chance to be human again.
--
How far do you think AI will go in the future?
Do you think it is possible to program AI to follow ethics and how will it know when to appropriately act upon ethics and how?

Grab your heart and venture into, A Man's Traveled Heart
Coming soon, The Bleeding of Words.