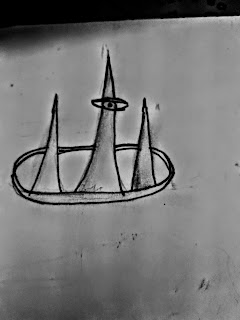 Deep organs pour over the cold mid afternoon in ceremony of new rule, their maestros arched over keys with crooked backs. The clouds are heavy and winds howl as she takes up her crown. Her mind digests the scenery of her new found rule over the kingdom. Her eyes judge with passing malice as she looks to her people.

Her heart beats no more of subtle hints of power as she no longer needs to bare false innocence of a woman. She smiles as she relishes in the new found glory of command. Her loyal devotees of the priest hood stand beside her. Cloaks draped, faces hidden, but their dull grinning teeth find way from their shrouded presence.

Crimson flags hang with authority as she stands before them with her new shimmering crown. Three spikes of gold stand erect toward the sky upon the crown. The middle stands the highest with an eye of silver melded in the middle. The accompanied pair are evenly separated from the center. Both standing short but with confidence as they pierce the air around them.

Crowned, she raises her hands to her head and gently slides her eager fingers along her new head piece. She smirks with power as she licks her lips, as if tasting what she has been given. The crowd of thousands stare in silence as they look to their new ruler standing upon her stone balcony.

They fear what she might bring for she is built of greed. But birthed of royal blood and the death of her brother has brought her to them. She concludes the need to revel in her crown and places her hands upon the balcony ledge.

She looks down upon her people and smiles wide, beautiful she may be. But beneath her skin lies the bones and heart of a devil. She has always been driven with greed and control. Throughout her ever growing life, she was caught numerous times spreading rumors of her younger brother. In hopes to smear him from gaining the crown.

Her jeweled eyes of blue and her dark hair of ravens bid her no help in hiding her vile desires. She grips the ledge and thrusts a hand into the hair with vigor. Forming a fist she holds her hand steady and yells out,

"You shall now be the great people of a prospering kingdom. No more shall you hear of lies and be told falsehoods of our great kingdoms well being. "

She grows silent for a moment, as she allows the overwhelming presence of her command to embrace her.

"Kneel before your new ruler and let us journey to new heights. Let our enemies fall before us and let us bleed who ever thinks against us."

The crowd is silent but only for a moment. She signals a soldier below that barricades the people from the castle. He steps forward lunging his spear into a nearby spectator. Horrible shrills and gasps escape the crowd upon seeing the horrific sight. Those that see step back as one who knows the unfortunate bystander weeps as he holds the wounded friend.

The word of the dying spectator is quickly dispersed through the crowd. So from fear, power is given and the crowd cheers loudly in the coming of their new ruler.

Do you think corrupt leaders still find their way through our systems of today?

Be bold and let your heart lead the way, A Man's Traveled Heart
Coming soon, The Bleeding of Words