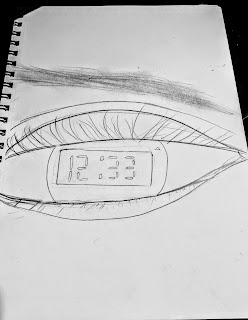 Cab is struggling in the race. His heart is beating quicker than the pace at which the rain is falling. The Georgia heat is basking upon his body. Sweat has consumed every thread he is wearing. Behind is the beast of Defeat and its father, Surrender.

His back is aching as the weight he carries increases with pain as he fights to keep stepping forward. The streets continue to incline and decline like a wild waves upon the sea. His eyes are focused to the front. Every ounce in his body wants to quit.

His mind is teetering on reasonable reasons to give up. To let go and fall away into the bliss of sitting down. But he can't, he refuses. He did not come this far to give up. To let sweat, pain, and challenges be the barrier of his dream.

So he fights, he clears his mind to keep going, to not falter and quit. As he keeps pushing, he hears the rumbling of Defeat and Surrender tailing him. Their dark luminous eyes glare over him as Cab keeps on stepping.

Time is running out, his heart is racing, but he keeps on going.

As he steps with all the energy he has left, his throat begins to dry. He can feel the walls his mouth stick to his teeth. He reaches for his water, but it is empty. He seas he did not close his water container correctly before the race. A swift breeze of frustration and worry over take his mind.

He can feel himself starting to fall dizzy to exhaustion and dehydration. He is the last, the smallest left in the race. Time is down to ten minutes, he can see the end. He is unsure if he will make it, he keeps marching onward.

The heat of Georgia picks up, the sun starts to peer from the distant trees. He ceases to sweat, as dehydration is now the only reason he will fail. His eyes dive in and out of reality. His chest bears shallow breaths and his heart feels as if it is near its end.

Closer, he can feel the cheer of those at the end. He can hear them call his name.

Time is ticking away fast, his dream is only half mile away. He looks to his watch, he sees how much time is left. He feels the grip of time warp around his throat. He can feel his legs start to give. The ruck upon his back now feels to be a hundred pounds.

His body is weak, his feet battered from pressure. He feels the pull of gravity gripping him tighter. His body is crying for him to stop. His eyes are fading quickly, thirst is calling out from his dry throat. His lips feel of a desert floor.

Closer, three minutes remain. He is fighting his own steps to keep pressing on. He can now see the finish line counter. It is counting down to the last minute. Fear thrusts into his chest, but he gives in to nothing.

He hears the encouragement of those that finished before him. He can feel the accomplishment of finishing before he finishes.

Tick...tick...tick the clock is down to thirty seconds. Will this all be a waste he thinks?

"The second attempt cannot be my last" Cab says has jogs the last fifteen yards with determination on his face.

Cab rushes the best he can. Everything in him is gone, his energy has dissipated. All that remains is steam. He lunges with large steps and in the last ten seconds he makes it. He passes the finish line. He walks passed those before him and smiles.

Stands off on the side and lines up with all the conquerors of the race.
---
What is something in your life you thought you were not going to be able to achieve; but you kept pressing on even with defeat at your back?