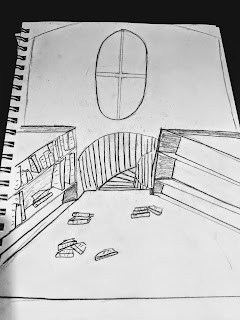 "Open the book!" Misha says as Soush holds it in his hands. His light silver hair reflects the burning flame of the candle as Misha excitedly holds it over Soush's head.

"Quickly, quickly, open it before mother gets home!" Misha wiggling her excited body as a drop of candle wax lands on the cover of the book.

Soush pulls the book away as soon as the wax lands on it. "Look what you did...keep the candle away or you'll ruin the book." Misha pulls the candle away quickly as her face falls with unexpected disappointment in herself.

But pulling it away quickly, more candle wax drops from the melting stick of wax. Some even splashes onto the ground and onto the surrounding books that are sprawled out on the floor. Soush, see's what Misha has done.

He stands up in haste, drops the book on the ground. His eyes glare upon Misha as he attempts to grasp the candle. But Misha resists, she pulls the candle away from Soush as he fights for it.

"Get away Soush! I am holding the candle, I want it! I can't read, so I hold the candle so you can read to me like you promised." Misha steps a few paces backward from Soush as he grabs her wrist.

"Give it to me Misha, look what you are doing. There is wax everywhere. Mother is going to see it and see that we were here when we should be asleep!"

Soush struggles to get the candle from Misha. As they fight the flame dances about. Causing their shadows to move in erratic fashion. Wild shapes form upon the wall as their shadows try to dodge the light.

Suddenly, in their frenzy of who is in control the candle, it is dropped. It hits the ground and as it does, it lands wick first. Causing a burn mark into the carpet, a fairly large mark. One, one would notice upon entry in the room, even during a dimly lit night.

Hitting the ground, the candle bounces and rolls under a bookshelf nearby.  Instantly Misha and Soush freeze!

Soush looks at Misha sternly and presses his arms to his sides and makes a fist with each hand. He then clenches his teeth and says, "Look what you did Misha, now we are really in trouble!"

Soush turns away from Misha and tries to retrieve the candle. Misha stands behind Soush, silent tears start to fall from her face. Her pale olive skin becomes blushed in  rosy red. Her dark hair hangs over her face as her lips start to quiver in sadness.

She starts to cry. Soush hears and immediately stops trying to retrieve the candle, walks over to Misha and wraps his arms around his sister. "Don't cry Misha, it was my fault, I should have told you to be more careful with the candle."

Soush takes the sleeve of his grey shirt and pinches the ends of his sleeves with two fingers. He then gently starts to wipe away Misha's tears. For only a few seconds Misha cries and then wraps her arms around Soush and says, "I'm sorry, I should have been more careful. I was too excited."

Misha then slowly lets go of Soush and wipes her face with the shoulder of her red nightgown.
Soush then looks at Misha and says, "Quick, we must hide the burn mark before mother gets home. Or we are surely in trouble for a long time."

Just as he finishes his sentence, their mother enters the house. They hear the door open, as it does, a flash of lightning burst through the window that overlooks the library room they are in. It frightens them, they become startled and they both trip over a pile of books.

The mother hears the crashing of books. "Is that you Misha, Soush?"

The mother dries herself off from the rain with a towel that hangs at the entrance of the home. She  removes her shoes and slowly makes her way up the curving steps to the library. As she reaches the middle of the stairs, another flash of lightning strikes.

From the lightning, two large shadows are cast upon the wall to the right of the stairs.  The mothers see's them. She sees it is the children. She then continues to walk up the stairs as she does she says,

"I told you guys to stay in bed while I was gone, it is late and you should be sleeping."

She reaches the top of the stairs and there they are, Misha and Soush, both standing attentively as their mother looks at them.

Both Misha and Soush respond at the same time
Both look over at each other as they finish their sentences.

The mother tries not to smile, but she does. She can't help it, Misha and Soush melt her heart with their poor attempts at lying. She knows they desperately wanted to read newly purchased book but today has been too busy for her to sit down and read it to them.

As she smiles, she smells something, "Is something burning?"

Soush and Misha do their best to look innocent. The mother see's the looks in their eyes, "Alright, what did you guys do?"

They remain silent for a second and then Soush responds, "Nothing."

"Then what is that smell" Says the mother as she starts sniffing around. She walks up to the children and gently separates them and smells behind them. The scent gets stronger, she smells that it is coming from the ground.

The room is poorly lit by the moon. So she does not see the wax. She kneels down and pushes a small pile of books out of the way. Both Misha and Soush's little hearts leap in speed. The burn mark is revealed and mother sees it.

"What happen guys, who did this...Misha...Soush" The mother stands up and crosses her arms.

Soush looks at Misha and then at his mother. "It was me mother, I wanted to read the new book so I brought a candle and accidentally dropped it. I tripped over the books." Soush puts on a face of guilt and looks down at the ground.

The mother leans over and grabs Soush by the arm and kneels down to speak to him.

"You could have burned the house down, if  that happened, you guys could have gotten badly hurt or worse, you could have been killed. You also would have burned all the books. Then what would we have to read?...Now get to bed and we will discuss this more in the morning."
---
When have you covered for a sibling and or tried to hide something you did wrong rather than admit to it from the start?

Don't forget to get a copy of, A Man's Traveled Heart

Coming soon, The Bleeding of Words.