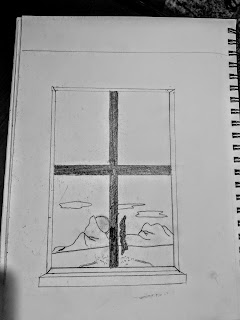 A Daughters Escape
"Come on, get the notes right, you only have one more day to the show. Father won't be pleased if you end up getting kicked out the show."

Lily turns her head back toward her sister who stands behind her. Lily's fingers remain positioned upon the harp. The sun glazes the room through thin white shades of the music room. It's dark floors resonate with a cool feel of a summereve as the sun rests upon it.

Lily, now looking to her sister Ashley, smirks and says, "Guess I will be getting kicked out, I'd rather be disliked by fathers so called friends than do something I find no passion in. Father only wants me to play because all his friends youngest daughters play instruments, but I don't want to." Lily drops her arms from the harp and stands up and turns toward Ashley.

Ashley, standing next to the window, the sun glares off her pearl skin like light upon soft ivory keys. She looks to Lily, places her hands upon her shoulders and says, "I know Lily, but that is not how this works. I had to be married to Gerald Reats, I did not want that, but it is what is best for the family."

Lily scoffs, "What's best for the family? What about what is best for me, for us? If father is so concerned about that family why does he not care how we feel? He never even asks if I like playing the harp."

Ashley saddens her face, turns to the window and opens the blinds. Instantly Ashley and Lily shade their eyes by squinting as the once shrouded sun rushes into the room. Ashley, now adjusted to the brightness of the sun, looks out over the view from the window,

"See Lily, see what is out here, all this land. All this beauty, did not come from fathers individual needs but the needs of the family. He sacrificed everything for us. Even mother has had to do things she wish she didn't have to do. But look at where we are versus where we could be." Ashley points out into the distance, where a large cloud of billowing black smoke rises.

Lily steps to the window and looks out at what Ashley is pointing toward. Lily see's the dark cloud of smoke, she looks at it for a moment before saying a word. She adjusts her dress that is one size to small and says with a resentful voice. "At least there, they are probably not forced by their father to do and be things they are not."

Ashley laughs softly, "There, they have to fight for food, for clothes and everything else. Here, it is all provided for us. There is no worries here, all we have to do is follow Fathers orders and life will be great for us."

Lily becomes tense in the conversation, she stops her foot. Her heel hits the ground which echoes off the dark marble floor. "But I am tired of following what father wants. I am almost an adult and I want to make my own choices. I don't want to be lathered in the wealth of our family. I don't want to be dressed all the time in these fancy clothes. Smiling at everyone that comes over for fathers party. Knowing full well even father despises them. I am sick of being a family of facade all for this." Lily wraps her hand around her golden necklace of a dove.

"I don't care for these riches. I can't even remember the last time we all actually spent time together. Do you even know when the last time we had dinner together." Lily frustrated, starts to remove her necklace. But in her heated state she keeps fumbling with her fingers.

Ashley see's Lily trying to remove it and gestures Lily to turn around. As she helps Lily remove it she says, "I don't remember the last time we all spent time together. If we do, we are always mingling in separate rooms trying to verbally please our guests. I to don't want all this but the legacy of our family must stand if we don't want our country to suffer." Ashley takes the necklace from Lily's neck and places it on a table beside them.

Lily turns back to Ashley, her face flushed with frustration. "Legacy, country, suffer? Ashley, the country is already falling apart. Have you not noticed only the wealthiest are surviving while all the rest of the country dies. Father is a lie of his own word or, is at least blind, more likely willingly blind to the suffering of our country. He takes everything and gives very little. He gives orders but never listens. He thinks he knows best for all. People are suffering in the streets. Yet, here we are, enjoying the spoils of our riches.

As father fraternizes with our neighboring "friends" of wealth. Don't you think it odd that people are lining up for food? That we live so far from our "own people." Father hasn't stepped foot on country ground in years. He stays behind the walls of our home and flies in his planes. Do you not see the hypocrisy behind what father does? I am sick of it. He rules with lies, forcing the people to rely on him. He gives only when it benefits his persona. He gives only when it is a last resort and will give only to quiet the streets. Remember when those people came to protest? He sent out his guards and they shot people right in front our home."

Ashley nods and interjects, "Yes I remember that, but they wanted to kill father."

Lily, "Did they?  Don't you find it odd. Three hundred people bust through our gates to protest. But not a single one carried a gun. I mean, guns are outlawed, but what criminal abides by law? None of them had weapons. They were starving is all, did you not see how weak they looked. The people protesting that day looked like zombies. Most had no shirts and their ribs were showing. Doe it not make you sick to your stomach that our "legacy" is breeding starving people? For bloody hell Ashley, our family life is hidden in secrecy from everyone. We cant even leave the grounds of our home without escorts and a plan. We can't enjoy life like the free people we are supposed to be. At least those out there, (pointing to the black smoke.) Get to travel if so lucky and see other parts of the country."

Ashley lowers her head and starts to cry. "Yes, I find our entire family setup terrible. I find it to be a corrupt existence. If you knew the things I have seen you would trust no one. I don't even trust myself any more. I have seen father request the murder of people of his own country. All because they think differently. I have seen him beat those that oppose him with his own bare hands. Our family is disgusting. Father has even sold our mother to please his "friends."  You are right Lily, you should do what you want. What you think is best for you. This family is wrong, it never should have been. (She clears up tears and finds a smile.) But it is not too late for you. You can get out of here before you end up like me or worse. We can get you to start a new life, a better one."

"But how?" Lily asks as she stares at Ashley fighting back tears.

Ashley pulls Lily in close," Gerald, he'll do anything for me. He's weak, he'll do what I want."

Lily smiles and says, "When can we do this?"

"Lets start tonight, lets get you out before fathers re-election."
---
Have you ever been a prisoner of decisions that were not made by you?

Follow your heart, your intuition, it is the only way to live,   A Man's Traveled Heart
Coming soon, The Bleeding of Words