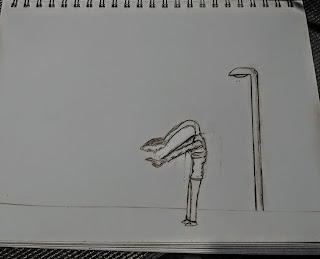 I took my hand to the steering wheel and shoved my foot to the accelerator. The world around me became a blur. I felt the force of my engine press me back into my seat. Everything in my body tingled, a great sense of satisfaction covered my body.

The speed, the power, almost uncontrollable. I looked ahead of me, dead eye to the horizon, with no chance of looking back. I wanted nothing to do with he city behind me. As I sped down the highway, I took a glimpse in my rear view mirror.

I could see the city lights dwindle, I smiled as it was finally my time to leave. My tires left a mark, something for it to remind me by. Something, to show I care nothing about that city. It has become a hell hole of memories and foolish trends.

I loath everything about it. Everyday I could feel the weight of bullshit the people in that city permeated. It was like humidity sticking to your skin. No matter what you did, the moment you stepped outside, you were cloaked in it.

Peoples eyes were filled with facade. No one was happy, but damn, did they pretend they were. Buying up clothes and cars, sharing their moments of luxury at the palm of their hands. I could take it no more, so here I am.

Speeding off into the unexpected and the uncharted world before me. The moon gleams off my window like an eye, as if it were watching me, sad for my departure. But I have no regrets, I wanted to leave, I needed to leave.

This obsession to be popular has caused an exhaustion of the brain. Everyone is so damn busy trying to show themselves off, they don't even know why they hell we are getting taxed fifty percent of our money.

They would rather starve than be without their social media. Walking the city grounds, you see people clearly, that haven't ate in weeks, but will share their miserable smile as they sit in a fancy restaurant but can't afford it. Virtual reality is even worse.

Hundreds of thousands of people plug into it every day for hours. Escaping their reality, playing as someone, as something else. Play long enough, and you'll seep saliva from your  mouth like a drugged up mental patient. Your body becomes almost catatonic to everything but the game.

You're locked out of your own body. What is worse, is the addiction of the rewards you get. You can live the life you want for a quarter of the price in the real world. Smart move on the gaming industry, keep the dull fools connected through ability to live how people wish they could.

Even politicians enjoy the mental slumber of this city. It's a drain of the soul, the streets are never asleep, lights beam at every corner and every one holds a phone. Necks bent like ostriches in the sand. There are now moving sidewalks, you no longer have to step or walk anywhere among the city blocks.

Want to cross the street without having to look up? No problem, just let the sidewalk system take you across when it is safe to cross. As busy as the city is, the only voices you'll hear, are the ones in your head.

Everyone is so damn busy devouring their social media and posting what ever shit they can. It is a city of vanity and fame. The worst part is, if you can't afford a phone, the city will provide one for you. It has now become a human right to have a phone but not a human right to protect yourself.

We are without any sharp objects, knives are banned, guns, ropes, purses no longer have handles. They have rubber clips that hang from rubber hooks off clothing. It is a city of complete control. So much so, if anyone has a heart attack, automated drones come by and sweep them away.

Any sort of sign of illness, you are pressed from the streets till you are better. Good luck finding a way to change the city, there is no longer a voting system like there used to be. There are now a hundred consultants that do that for us.

They have, what you might call, a god complex. They know all and be all, ha! Well, I am now far from the city, at least fifty miles. I can already feel the stress lift from my chest and my heart settle at ease.
-----
Where do you think the world is going with technology?