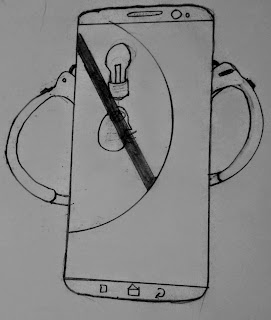 We are no longer the individuals we used to be. We no longer have the unique ability to be as we want. We were once free thinking and free moving, now we are the products of our creations. We are pawns to the ever growing etymology of technology.

It all started with mobile phones, the ability to call from where ever you are. Then came the attachment of a sim card. The ability for satellites to track calls for the card to store information. After that, came the use of the internet from our hands.

A click of the button and a world of information and connection is at the tip of your fingers. As that progressed we became overwhelmed with information. No one could keep up, time became distorted because of the swelling of information.

Technology allowed the gushing of information to be distrusted by anyone. Any fool could spew their ideas to the world, like minded people would cling to it. At first it was fascinating, freeing, until the freedom of our thoughts became restricted by the naive and immature.  It allowed a quick division between us. We became angered at each-other within in instant.

Information was skewed to favor one another, toward the groups we identified with. Strangely, most people of the world were not torn in animosity of the world or those around them. For they were busy improving themselves and finding solutions to problems rather than leading thought with pointed fingers and blame.

We became false contributors to politics, ourselves, our community. Once the world became too bias, too tilted on its axis of thought, to even recognize a lie; we fell completely to the oblivious. We became utterly and willingly blind to our faults.

Eventually finding hate among each other. But they were all too unwilling to separate or even give a moment of discussion to find clarification for their misunderstandings or disagreements. For seeing the light, their own reflection would tear them from their Ivory Tower of righteous tongues. As more and more tangled webs of hostility grew between us all, and as technology vomited information.

We became forced to follow the outrageous laws of these virtue seekers. Why you might ask? Well, these virtue calling illiterate fools drenched the world in hate. They became so powerful, that every piece of information sent to the world through the internet, was filtered by these people.

They found ways to turn many into enemies of themselves, of the human race. Contorting the ideas of family and life. Creating a world where your thoughts, no matter the illogical fantasy behind them, mattered, and were truthful no matter the science or consequence behind them.

Technology corroded even our own most personal of things. Our neighborhoods were surveyed by cameras every hundred-feet. Any business that employed more than five employees was forced to give their employees mandatory information briefings. keeping them up to date on what is going on in the world and what they should think and do.

They are also forced to higher not based on character or work, but on a scale of injustice. The more unfortunate you are, what ever that means exactly, the better chance that you receive a job. If your injustice score is more than fifty point, you can't be fired, unless someone with more injustice comes along.

Even our cars became products of the virtuous and the corrupt dwellings of their businesses. Everywhere we go, we are tracked, but the information is "only" shared if we do something illegal and law enforcement is needed to interject.

If you don't stop long enough at a stop sign, for even a fraction of a second. Your car will immediately be turned over to the state police, from a remote location and driven to a safe area to pull over so they can write you a ticket. Which is printed from your vehicle.

If you speak certain words, your car will signal these words to the authorities to make sure you are not planning any illegal activities. Even your home is monitored in a such a way. Even jokes are instantly represented has unlawful, for they can congest real illegal activity over the system. For that, you are cited a ticket, but only if you can prove the humor behind it.

This is done by allowing the authorities to go back and listen to your conversations as far back as they see fit. The further they go back, vehicles keep track for however long you are in them. So the further back they go the more chances that you will be cited.

The world has become controlled by the greedy, immature, virtue spilling, Ivory Tower pompous wealthy of the socialist and communist sense. Dare you wish to succeed beyond your neighbor and you shall be fined.

All the while the tower at the center of each city swells with riches, keeping things "fair and balanced." But now, now we are all poor. I guess it better we all suffer, than some be left to the dust?

Will we ever swing back, I doubt it? For the only way for such a thing to happen, the world would have to go dark.
-----
Thank you for reading, what do you think the future holds for us?