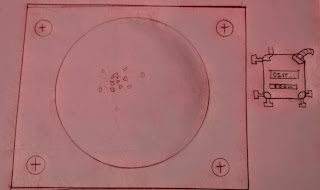 I watched as it all erupted like clay tossed against stone. Piece by piece, the world was flung into the far reaches of space. My capsule was one of the last to have launched. I was only eight at the time. But I will never forget the feeling. Though I was young to the world and had a very short time; of even a morsel of what the world truly was.

It felt as if a part of me had been ripped from my chest. I can still remember the colors that world presented us. It was a bold array of showered hues. Even in the most harsh of environments you could find something to awe the eyes and heart.

All those shows on TV that explored the world and brought it to our living rooms was astounding. So much to be seen and so little time to enjoy it. Sadly, my time was much shorter than many thanks to ever greedy needs of those who wished us no ability to advance.

We were sunk back to almost the 21st century.

I remember all the commercials and news that would speak poorly of our existence, rather than find solutions. They thought us better off, than with the planet. Even at my young age I found it odd that there were those who wished us dead. To just hand the world over to the creatures that are spoken of as things of pure innocence.

It became a world comprised of endless need to please that which can give nothing back to us. To please things that give no more care for their own than us.  It was disgusting times and now, they are even worse or, rather the same.

I remember as I watched the world explode into a million shards from our capsule window from five hundred miles away as my mother pulled me from the winodow, she said, "Don't look dear, we did not deserve it in the first place."

Right there, in that moment, what she said, drew a strange thought in my head. One I could not comprehend at the time. But now I can, "We should give the world to those creatures that can bring no change, but now we care not that the world is gone and those creatures with it?"

It was an instant one-eighty, I realized that a majority of the people from that world, were more concerned about appearances of their thoughts than their words, their actions.

As the capsule flew further and further away and as my mother pulled me further from the window. I cried, but I cried silently. For there were things I would never experience nor understand about how we got where we are now.

For much of the information that could have saved our world. Was lost in a flood, a flood we had known was coming for a month. But again, the need for appearances over truth was more important. I can't begin to explain what I am learning now.

I work at the prison now on our new planet. I guard the most "ruthless" people the world had ever known. People that grew up on our planet before it blew up. We call them, "The Interference." When I first started working here, I had great resentment toward these people.

But the longer I work here, the more I learn about what truly happened. Each of these prisoners has a story, some even have files hidden in their chambers. How they got them there, I do not know? I am just a new guy still. Only six months in and we only get new recruits once a year, that's if there is room for new recruits.

But as I dig deeper and deeper into how we are formed now. The more I see our move from the gorgeous world that we had before. To this massive dismal, barely habitable planet. I see it was an endless game of fraudulent exploitation of the worlds own people and of those that truly wanted to help.

It was a finite game of lies which still continues, and death is the penalty for exposing any lies of ruling.
------
If we do leave our planet, where do you think we will end up and why?

More thrilling stories to be digested in, A Man's Traveled Heart
Coming soon, The Bleeding of Words