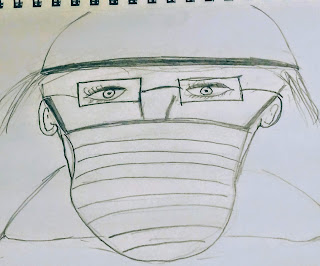 I woke, gripped in the cold grasp of a nightmare. My lungs pulsating in the hunger for air as my mind played games in the shadows. My heart quaking in the frightful gloom of my ghastly dream. But as I woke, a strange tickle lingered in my throat.

I began to cough uncontrollably, as if I was plagued with the unsightly sickness of tuberculosis. I have not been sick in over a year. I have had my yearly check ups and am highly active in my health. I found it extremely odd.

So upon my waking I took heed to the coughing and quickly got dressed. I was fighting tooth and nail to keep back the cough the best I could. But I couldn't, it was quite the struggle for me to get dressed. It felt as if my body was trying to resist the act of clothing myself.

Once I was dressed, I rushed out the door hailed a taxi and boarded it. In between my manic coughing, I removed my arm from my mouth and told the driver where to go. He immediately placed on a doctors mask and said, "You can never be too careful."

Once I arrived at the doctors office, the taxi pulled over, still, I remained a constant protagonist of this cough. I reached into my jacket and pulled out my wallet and removed what cash I had on me.  "Thirty should cover it," I said as I leaned forward to hand the driver the money.

The driver then turned around with disgusted eyes as he reached back for the money. Reaching for the money our hands made contact and he instantly retracted his hand but not without grabbing hold of the money first.

Just as I was leaving the taxi I caught myself in the rear-view mirror, my eyes were completely red. A sudden angst of fear jolted to my heart. After frightfully gazing into my own eyes I removed myself from the taxi and ran in to the office of my doctor.

She picked up the phone next to her and paged for the doctor. She asked me to sit patiently, so I did. No more than thirty seconds later my doctor shows up. Slight concern dusted his face as he approached me.

Blue latex gloves covered his hands. Approaching me he placed down his clip board and pen on the front desk. He saw the condition of my eyes and grabbed hold of my right wrist and pulled out his pen sized flashlight from his breast pocket.

He then told me to look to my right. He examined me, as the light shinned into my cherry red eyes, It feels as if I was a foreign specimen under the guise of science. As he tried to hold me still between my rigorous coughs he said not a single word.

He then approached the nurse and spoke with her for moment. During that moment I became held by a breath of confusion as he has never acted like this toward me. He then turned back to me and asked me to meet him in waiting room three; so I did.

For about five minutes it was just me and my cough. Suddenly as a coughed breached the back of my throat the doctor entered. He entered with caution and a mask on his face. He approached me and began to ask me questions. First with the usual, how things are, the family and all that.

Then he asked me how I was feeling and about the cough. If I had any contact with anyone or anything unusual, I said no, not that I can recall or ever noticed. He then took a swab from my mouth and told me come back in six hours for the results.

So I left, but before I did, I had a strange twitch in my body that made want to fall. As it happened I reached out to embrace the doctor to stop my potential fall. When I did, he was mid way removing his gloves and I grasped hold of one of his hands as I was falling.

He helped me back up and then quickly washed his hands. While leaving the office the nurse was standing at the entrance of the office building. She smiled and handed me a bottle of cough suppressant. She told me to take it every three hours.

I thanked her and made my way outside. The cough was ruthless at this point. I could feel my throat becoming exhausted. To the point where it is painful to even speak. I then ripped into the bottle of cough suppressant and took a swig. A swig that seemed surmountable to the required dosage.

It seemed to work right away, I smiled as a moment of silence overcame me. It felt good not to cough. I then called for a ride. I called my brother and waited for about fifteen minutes. It was seven AM and I was exhausted. It started to rain. The sky looked just as dismal as I felt.

My brother arrived and I got into his car. It just so happened to be our family reunion and he was in town from New York. We drove for about twenty minutes. I told him what was up. Once we arrived at our parents that same tingle in my throat came back.

I started to cough again. I found it quite irksome the cough suppressant already wore off. So I took more. This time, it had only slight a affect on the cough. I only coughed probably every few minutes than every few seconds.

My brother concerned, asked me if I needed anything, I said no. As we walked to the house, strangely I started to feel better. We walked into the house. Not a second of silence was there the moment I walked in. Everyone in the family was there and we all hugged. Everyone asked me about my eyes.

I told them what was going on and they all said their hopes of my speedy recovery. After all the hugs were exchanged, I became increasingly exhausted. I told everyone I'm going to take nap. So I walked myself to my old room and laid upon the guest bed.

I am sure only two minutes flew by till I fell asleep. Upon my sleep vivid dreams whirled through my mind like a wild storm. After what I expected was only an hour, was actually eighteen hours. When I woke, I felt extremely better. I then walked out of my room and into the bathroom. My eyes were still red, but my cough was gone and I felt no aches or pains.

I then made my way down the stairs, and when I did. I saw something I never expected and felt something I had never felt before. As I walked to the living room where everyone tends to mingle; I decided to go into the kitchen first at last minute.

I was hungry, I opened the fridge and saw my name written on a few items. I pulled them out and set them on the counter. I then had a craving for some chocolate, I'm not one for sweets but I was craving it so I wanted some. I called out to my mother to see if she had any. But there was no response.

At first I paid it no mind. Then, as I prepared my food I found it extremely odd there were no voices. It was only about eight at night. Usually we are a wild bunch during a reunion. So I stopped what I was doing and walked into the living room.

Everyone was there, but no one was moving or speaking. I saw my mom, pale blue skin, and no motion at all. I quickly approached her and started to speak to her. Her eyes looked of glazed glass.  No response, so I shook her, but still no response. I looked around me and everyone appeared the same.

I rushed to the phone and called nine-one-one. They answered but told me they were swamped with the same situation. I then turned on the TV, and across each channel read, Unknown Virus Sweeping the State, already ten-thousand deaths and counting.
----
Thank you for reading, what would be your first priority in this situation?

Thrilling words to be read in, A Man's Traveled Heart
Coming soon, The Bleeding of Words