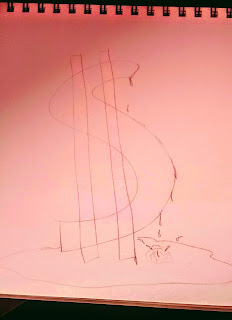 He has lied for so long it has become his truth. Creating power, creating wealth with such a tongue of deceit. Smirking between the acts of his crimes as he slides through the bars. Yet, he is praised for his so called gracious endeavors and his accolades of triumphant change.

Slithering beneath the grass he has grasped the ankles of his followers, sinking his fangs with precision. Poisoning their thoughts, their freedom with hypocrisy, fraud, and the keen ability of a silver tongue.

Upon his pedestal he walks with a darkly sheen, as if something unworldly. As he ensnares the weak with bountiful dishonesty. With deceptive hatred toward his enemy, using the feeble as fodder for his tricks. His inevitable plan to be sly, powerful, and filthy to world, but be lacking in consequence.

Engaging in the atrocious behind closed doors. Generating his wealth through the arms of our enemies and giving no heed to the fallout that shall be. He lives in marriage but has looped his flesh in fruitless desires upon the younger, more naive of women, and speaks of no remorse. Using his position as reason to gain pleasure, even in the chambers of royalty.

But dare we speak poor of him, for such a man is a great curator of justice, not just for man, but women. His mistakes, though still curated upon his sinister foundation, with no true heart of confession or regret. Many still hold his history as if to be bold, an undying legacy of change.

Bringing hope to a generation that now cowers beneath a pitted narrative. But they will stand beside him and he beside them. As if the unholy acts and ravaged consent of others is but a spec of dust upon the shoulder; waiting to be brushed.

He is without out his evil queen, as she too allows him to walk without a bruise. Closing the door as the vile spills from his guts. Paying no mind to his demeanor to be feverish in toward the flesh. Strolling through gardens and picking that which he craves with no worry of confinement.

For a village, no, a city of corruption has he created. Allowing the sewage of lies to be the water of which he drinks. Surfing on the taxes of others and polluting the minds of the young, how foolish must we become, to allow the freedom of such a man?

Even if to cut him from his knees, how does one succumb to justice in a world that praises him in all scenes of the famous?
----
Thank you for reading, do you think there is corruption in our system, if so why and where?

Thank you for your support, I truly appreciate it!