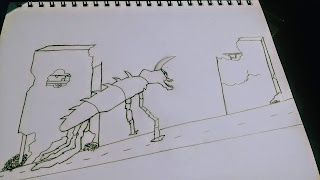 Winter has frozen over the blight city streets. The air nips with a brisk bite as the world sits almost silent. All that is heard is the rumbling of heavy footsteps as the world now no longer lives above ground.

Humans have been cast to the sewers and subdivides of the underground. Beasts and monstrous creatures now roam the once beloved Earth. Much has yet to be explained as to where these foul monsters were birthed and why they have come.

It has been ten years since they arrived on a beautiful summers eve. Children were at play and the world rested in what one may say, is the closest to harmony has ever come. Conflicts had been decreasing the past twenty years.

All countries had became exhausted and at a stand still with war. Emotions for the entire world echoed for a moment of silence. Which they received, but it was brought, not out of diplomacy, but  from the fear of everything ending.

A simple push of a button and the world becomes evaporated. So each country, being well aware of such an out come, ceased their actions. Deciding to merely exist.

But even in peace, there drives a snake looking to consume it. So, on this summers eve, a large abyss ripped open from the earth. Upon its opening creatures of hellish decent rose from it. Teeth stained with blood and crowded with  flesh hung from these foul things.

Skeletons, as tall as ten stories crept from the abyss. Screaming in agony, as if in a constant state of torture. Quickly armies stood up to fight, but to no prevail, all was lost. The monsters could not be defeated.

No matter how many they killed, more and more peeled from the dark hole in the earth. The only chance of survival, is to push underground. So they did, every person around every inch of the world fled to caves and sewers.

Fleeing with what ever supplies they could. But eventually they ran out, food became so scarce, cannibalism became a last resort for many. But these people were pushed out from the rest. Forced to find a way to survive above ground.

And which they did, they now walk side by side the foul beasts and hunt for those that live below ground. In sacrifice to the monsters so that they will not be eaten and left to do as they please.

At early morning, during an eclipse, another abyss opened from the earth. But this abyss what not dark, it gushed with a bright light. From this bright light, rose a child, no older than ten. In his hand was a book and a feather pen.

And with his feather pen, he looked to the beasts and struck them from his story.

A soft motherly voice, "It is time for bed now."

A book is slammed shut and a child's voice response.

Did you enjoy this one, do you want it to continue?

Find more stories in the raw book of, A Man's Traveled Heart
Coming soon, The Bleeding of Words