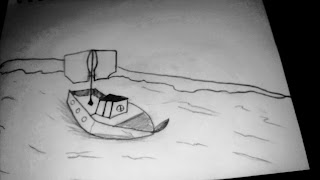 The ocean has become unforgiving. Its rage has expanded to the skies. The winds rush, clouds of murky black pour with rain. Waves rise with mighty violence, even creatures of the ocean are being thrust from the bowels of the ocean.

Everything is wrapped in the chaos of nature. No shore is in sight, no birds fly, only the instinct to survive is what fights among these waters, and in the center of it all. Is the most relentless of instincts there has ever been upon these waters.

The skillful pirate Persaveve, he has yet to be killed by those who hate him and those who wish to bring him to justice. It is told, that he had stabbed through the heart but was granted no death, for even the devil did not wish him in his house. To this day, it is believed that part of the sword that was forced through his chest remains within his heart.

A six inch scar can be seen upon his chest from the blade.

While the angry tantrum of the ocean wails upon the earth. Persaveve stands at the helm of his ship. His face grizzled by adventure and death. His eyes dense with the greed of riches and his teeth made of black pearls. He stands wavering back and forth has he holds his pipe to his mouth and lights the tobacco.

He stumbles back a few passes and while stumbling, he takes a few puffs from his pipe. He then regains his stance and grabs the helm. He begins to yell at his crew as his pipe hangs from his mouth. The crew response in silence and quickly heeds to Persaveve's commands.

Suddenly a wave, forms like rolling hill and starts to roll from the stern of the ship. Just as it starts to reach the ship it begins to cap. The waves frothing white broth starts to spill upon the wave. Persaveve's ship becomes slaved by the rushing wave.

As the ship is being forced by the wave Persaveve keeps at the helm. Not a second is spared without instruction. He shows no sign of fear, only the instinct to fight, to keep the ship afloat. The cap of the waves starts to crash closer and closer to the ship. Suddenly the wave rains down upon the ship.

Some of the crew are swept away. But Persaveve remains steady and keeps command of his crew. The crew follows each instruction with no second thought. Just as the wave goes to crash upon the crew. Persaveve instructs the crew do to an evasive maneuver.

A maneuver, only few have dared to try, for none have survived, and in this command of an extremely risky move, the crew freezes with reservation. You can see each holding the taste of death upon their lips. They look too Persaveve as if he is death himself. Coming to take what breath is no longer theirs.

But Persaveve shows no sympathy and in this stale moment, he spits his pipe from his mouth and yells too his men to listen, unless they wish to die. A few crew members yell to him that what they are about to attempt will kill them all, for no man has ever guided a ship this size in a curl.

Persaveve, the mad pirate that he is, stares to his men with his dense eyes as they become capsules of defiance to the words of his crew.

"No man will die upon this ship so long as I am captain and I am no mere man, I am a man of risk, a man of survival, I am a pirate, now take hold of your ropes or be the cowards I thought you were not and abandon this ship and be taken by mouth of the Cracken." Persaveve then places his eyes back upon the horizon and guides his crew.

Those that are fearful jump ship. The ocean gives them no chance, they are instantly taken under. The wave curls wildly as the crew begins to maneuver the ship. The wave is only a few feet from swallowing the ship like one would take a pill.

Persaveve does not let up on his roll as captain. He keeps his men steady as they roll with the wave. They can feel the presence of the ocean leering over them like Poseidon striking down with vengeance. The ship fills knee deep with water and the wave is not letting up. The sky is only growing darker and the wind is only growing stronger.

Persaveve, "Keep control men we are almost there, keep her steady!"

Suddenly as the wave starts to crest closer to the rear of the ship, a beam of sunlight breaks from the clouds. The wave starts to lower and the ship comes to a crashing halt. The entire crew and Persaveve are tossed in the ship.

The wave still has just enough energy to spill over the ship. It wallops like a heavy down pour for only a second or two. Everyone is jolted aboard the ship. Once things settle and the men realize they are not moving and the clouds are white and the wave is gone.

They stand up and look around, and as they do , there, at the helm, stands the great Persaveve, drenched in water grinning from ear to ear, pipe in hand; reaches into his pocket as the men stare waiting for him to speak. He pulls out a map and looks to it. He laughs to himself in an arrogant breath.

A laugh one makes when they have gotten away with something they did't expect to happen. He then looks to his crew and says,

"See men, I told you we would not die. For I am no mere man, I am a man of risk, of instinct, of perseverance and I do not adjust my survive-ability off the history of others. But by the ability to take a chance. So because of that, here we are among the Lost Shores of The Isle, and we made it alive."
----
What would you do in a situation no one has ever survived?

Find more exciting stories like this in, A Man's Traveled Heart
Coming soon, The Bleeding of Words.