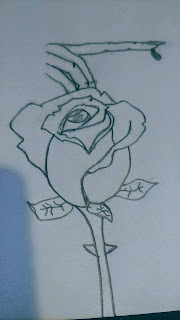 She wanted a love that was tried and true, but the script read to her. Was a script of broken strings and bloody hearts.

A vigorous sculpting of ruins, a burning village of sorrow. Her tears could never suffice in the suffocation of flames. For a pheromone crown of misery plagued the lining of her thoughts. Her soul, never blissfully cradled in the lips of serenity.

Her head upon her pillow was the closest to peace she would ever get. She wore scars upon her flesh from the empty and greatly articulated voices of shadows. Tasting her embroiled dictation of self. Which lacked any palpable succulence of flavor.

She was beauty lost in chaos, taken up by the unhealthy and wild madness of despair. Painting pictures of rejection upon her dark encrusted walls. Scarred in the screams of what would never be heard.

Her pride consulting her in thought as the ego laid waste to any hope. An unkempt heart bled her of countless devotions. Her lips sewn by her own hands as she looked herself in the mirror. Blood, dripping from needle to thread.

Like dew upon a web it hung, and she ignored. Alone in an otiose of breath. Far fetched from even a slight tint of faith, of life. What sadness followed her; portraying her as an indecent molding of creation.

Well endowed in the outlandish illusion of self deprivation. Sinking with darkness as if to be a friend, conducting romance upon its darkly flesh. Frost bit is her heart, as black as the night, ladled with no light.

Never finding fault in herself but in the conjecture of the world. Becoming a consent misprint of her own words. Never to edit, nor express the need for expulsion of phrases. She fell deep, into the cavernous coils of a broken heart.
-----
Sometimes a broken heart can bring us to much despair.

Don't hide the pain it brings.

How have you dealt with a broken heart?!

More heart tugging stories to be found in, A Man's Traveled Heart
Coming soon, The Bleeding of Words