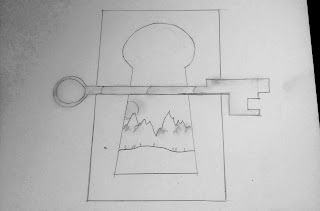 Tragedy, an unfortunate circumstance that is never punctual in its arrival. Always arriving when it suits its desire. Never in the perfect moment, where stability meets horror. It appeals to its own derivative of existence. Bearing no idealistic compassion for its unsightly contributions to those it harms.

But, beneath its unorthodox approach to its instruction of its self. It bears something no other event can bring. Though it brings much grief, misery, and entrails of suffering; there is a seed. A tiny seed, which can neither be touched nor seen, only felt.

A seed that brings opportunity, character, resistance and, wisdom. But these gifts are not without tribulation. Many may think tragedy is but a selfish creature; maybe so. But if greeted by heart and not of the mind, one can receive great abundance of spirit; life.

For what is lost, is never truly lost. It must go somewhere, like energy; it must be transferred. In such an ideal, if one wishes to believe such a thing. That which is stricken from us permits us what it once was. It gives a breath, breath we thought we never had; but if only one is to risk the inhalation of such energy.

To see, that in the catastrophic; one must become resourceful. Not just in the physical materialization of self and our surroundings. But in spirit; in the soul. tragedy brings us the opportunity to either be foolish and exploit the event as reason to fall.

To become but a but riddled aperture of suffering and feel no shame in such a path. Few will spite one for such a decision.  For tragedy is no mere simple task.

It can bury one beneath so much agony, the world will appear no brighter than the dark side of the moon; and with good reason. Viewing such a thought, what would be ones reason to keep going; if darkness is all that there shall be?

Or, one can find that in tragedy, there is an opportunity to learn. To love and embrace what did exist before the unsuspected event. To celebrate what has been lost and hold it dear. In such a choice, if one comes across such tragedy, be it of any kind. One already holds the ability to keep going. To find what new life is to be brought forth.

For the present, nor past holds any command on what the future shall bring. If one thinks highly of such an idea. Then one can see that tragedy is not in the path of revenge, but giving. The giving may seem horrific; one could even say its a heretical blasphemes contributor.

But in tragedy comes resistance; which births growth. Much like one is given in repetition of lifting objects that in turn resist ones efforts. So, in tragedy one finds resistance of the spirit. Growing ones spirit; soul I should say. Brings rise to an even better soul, a more purified version.

This may seem sickly of a thought. For many tragedies are but loss of life. But with this perspective, though it may seem dark. It delivers one hope, faith, it allows one the ability to see that what is lost is no less valuable than what is present. One shall also find, in time, that tragedy is but a key to an unlocked door.

Giving passage to a path that was once locked. To later, if one is so adamant and has learned of wisdom and suffering. That the key given to them, may be a key to be given to another, so that they may pass through their tragedy without thought of a foolish path.
----
Why do we fall so easily to our pain?

Find more ideas like this in, A Man's Traveled Heart
Coming soon, The Bleeding of Words