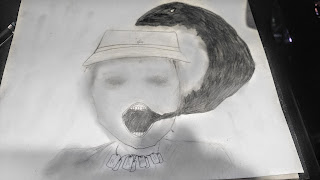 A roaring crowd of excitement and love. The return of fathers, sons, and brothers. Relief is the scent of the heart in this beating moment. At least, that is what it seems to be; but returning from the horrors of war, many are broken, but unaware.

Shadows drag behind closed eyes as they speak with loquacious tongues. Creating seamless memories to haunt with vivid realities. Tones of hell creep from the guilt that putrefies the soul. Rotting it with inflamed shame.

Coating the mind in endless darkness as pale eyes gaze with memory. Calling out the shadows that be the ghosts of battle. Flashes of heat engulf the body at rest; waking in an alert of anxious recollection of what one hopes to omit with the passing of time.

But hell knows of no such passing. It embodies itself in the pasture of mind and body. Entangling with depraved taste for madness. Boiling the mind in copious memoirs of terror; the actions of man. Blood curdling from lungs, limbs severed from force, and the boundless cold touch of death.

Anchoring man in frozen rivets of their own reflection. Bounding them to walls of frightful visions. Stretching them till any existence of themselves is wrenched from them like spoiled teeth. Left to cry in the misery of demons as shame laps them up with satisfaction.

As he, one tormented of his hell, ebbs to the imps of guilt. Prodding him with pitch forks that render him crippled in mind. Slowly designing a beast of empty cause; a corpse to be crucified. Evoking no help to the suffering.

Drawing only the bruised ego of pride. Grasping the throat of forgiveness till it can breathe no more. Hoping to amass a new soldier to the infantry of the damned. Screaming in the brutality of wicked voices. Clouding the heart of hope as it becomes but a dim light to the distant fog of Hades.

Lashing the causeless man in scars, as restitution for his actions. Producing him to be but a skeleton of his former. An outline of his once structured scaffolding; falling to the fiendish wills of echoes.

A roaring crowd of excitement and love; a scent of relief. Maybe not so, for many return as ghosts with no encouragement of the elder, nor brethren to seek aid upon return.
------
Thank you for reading, I hope this evoked a strong emotion.

What is your opinion on those who return from war, is there adequate help?