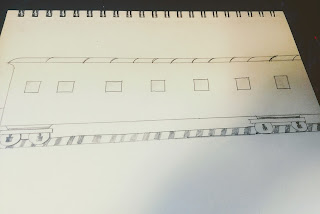 Three hundred and sixty-five days since she held him in her arms. Her whole body swept up in anxious fright and joy. She thinks to herself, "Will he remember me? Will he still love me?"

She throws on her best dress and lipstick; looks herself in the mirror and says, " I am gonna go the hair salon and strike myself the hair of an angel!"

Still looking herself in the mirror she twirls around with a large smile,

"Oh my, I can feel my heart beating against my chest."

She smiles and lets out a small giggle. She stops twirling and slides her hands down her sides, over her hips to make sure the dress forms perfectly to her body. She then places a hat upon her head to hide her wild hair before it is touched by her stylist Mary.

She quickly steps over to her closet, picks up her red heels and she rushes out her room and down the stairs. She reaches the bottom of the stairs and places on her heels. While struggling to keep her balance to place on her heels; she calls out to her roommate to announce she is leaving.

The roommate responseds with a muffled reply, "Okay, be safe out there, it's raining pretty hard."

She replies back with a simple and curtious, "okay, I will."

Her heels on; she walks over to the front door with excited steps. Before she exits, she grabs a long white jacket, puts it on and ties the waist band. She then leans over to her right and reaches for her small black hand bag. She looks inside to make sure her money for her hair is there.

She opens the front door, a gust of cool wind rushes in. She quickly pulls her jacket tight around her neck and makes her way outside. The rain is an torrential down pour but nothing will stop her from her love. She walks with a slight forward lean to fight against the wind. A few blocks and she reaches the hair salon.

She walks in and sits down for her appointment. Her and her hair stylist talk about her exciting day that is about to happen. They discuss how upset her stomach is from the anxious worry; of how she has not seen nor spoken with her fiance in person since last spring. Especially since it has been a month since any letters have come in. She mentions how her heart is beating so fast, it feels as if it could leap right out and run off without her.

Once the appointment is finished. She pays her stylist and walks outside; the rain has stopped and the sun is beginning to peer from the dreaded clouds. She begins her walk to the train station, only about four blocks.

She feels at her best, better than she has ever felt. She runs thoughts through her head as she makes her way to the station.

"I got my red dress, my lipstick, my hairs is done, he's about to be home, my heels are matching perfectly. Nothing is going to stop me from feeling so happy."

She reaches the station. She see's all the other women waiting for their men to return as well. The train pulls up. Her heart instantly coats with nervous tension. The train stops, the whistle blows and with no hesitation the men start to spill from the train. They are shoving and pushing each other out of the way with smiles stretching from ear to ear.

She watches with tense eyes as she scours the crowd for her fiance. Two minutes go by, three minutes, five minutes. No sign of him, she begins worry, she starts to stop some of the men and ask if they know where he is. Most, if not all respond with no knowledge.

Then, as she is about to ask another one of the soldiers if they know, a voice rings out her name. She quickly turns toward the voice and sees a man standing in the flood of people waving his hand. She hurries over as fast as she can. She reaches the man and sees its her fiances best friend, Eric.

He has no smile upon his face and he is carrying two duffel bags, one with his name and one with her fiances name. She didn't know what to think, except that she should give Eric a hug. She steps forward and hugs Eric, upon receiving a hug; Eric drops both the bags.

He doesn't say a word.  Hugging Eric, she starts to ask where her fiance is. But Eric doesn't answer. She then carefully pushes herself off Eric and looks up at him. He has a tear dangling from his right eye, she can see he is fighting it.

Her heart falls to the pit of her stomach the moment she sees the tear. She looks to Eric with worry and says, "No...no....he's..he's here...he has to be here. We are getting married next week."

Eric takes her hand, and fighting back tears he begins to tell her what happened.

"On our last mission.....we got hit by artillery. He didn't make it....I'm...I'm sorry. (He covers his mouth with his hand as he fights back his tears.) We tried to save him....but nothing could be done.

We fought back and got the guys that did it....but....but we got stranded for three weeks in the middle of nowhere. We had no way of communicating. Only reason we returned was a small scout unit happened to be heading out to replace another unit......They saw us and saved us."

Standing in silence and with a body crumbling of grief, she became numb. She can't move, she can't speak. Tears fall like rain as she just stares at Eric in shock of horror. She feels empty, alone, cold and miserable.
-----
Thank you for reading.