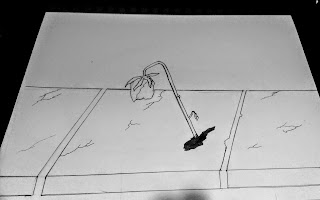 Young, and tragedy was is his bitter friend. Hand in hand they walk as they looked to the streets for vigor thoughts of death. Inspiration at the hands of the grotesque and the undesirable compositions of life. He found it strange no one desired to look deeper into what evoked fear and disgust.

But strangely he was, much like a doctor is drawn to the speculation of sickness. Even at a young he would find deceased insects and animals and examine them. He would strike poems from their monstrous poise. Those in the surrounding streets found him odd, many would cross the street if they saw him approaching.

But he paid them no mind for his thoughts were else where; dancing in the smog of sewers as he looked for new things of death. Scouring trees for rot or rats that had been feasted upon by their own kind. He found these things spectacular, they were something to be marveled.

For what brings such an outcome of the living?

Why must all come to an end?

What creates the beautiful to end up in the hands death?
Turning the most gorgeous of human, creature, or the vegetation of soil into a corpse of the pacified.

Such thoughts had a bizarre allure to him; maybe the lack of guardians was the reason many thought. But he had loving parents and healthful connection with them. Yet he was never found in the company of friends, but he always wore a smile.

Even on the most dismal of days you could find him searching every crevasse for something absurdly enchanting. Nothing coward him from the search of the fascinating.

Why he found such things to be an inspiration of his heart, no one ever knew. Maybe the loss of his younger brother, or the loss of his father, or maybe the famine that once stretched the roads as far as the eye could see?

What ever it may have been, it was something he never got rid of. Up until the day he died he created much from the curiosity of the rancid and the subject that few would wish to strike a conversation of; death.

Only time death was a subject to be conversed in his streets was in the mourning of another. But upon the end of a memorial, never would death pass ears until the next.
-----
Thank your for reading I truly appreciate it!

What subjects disgust or frighten you, let me know?

More stories and thoughts to be discovered in, A Man's Traveled Heart
Coming soon, The Bleeding of Words