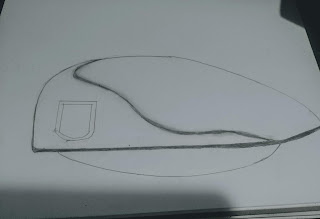 He was only nineteen, much like those around him; he was lost in what life was and where he should go. High school was over and the doors of life were open. He was overwhelmed at the thought of opportunities; but something in him drove him from the average path.

The choice to get a job or to go to college were dreadful thoughts. The idea of being placed once more in a room with a teacher. Listening to what mostly likely would have no interest in his heart nor mind; was agonizing to him. The mere thought of sitting at a small table stacked with books drew a nauseating urge from his gut.

Boredom followed beside this nauseous feel. Though he felt no desire for either a job or school, he had to make a choice. His fathered gave him three , go to school, get a job, or move out. All three of those were dreadful angles of thought.

Each tied a knot inside his heart, constricting his conscious will to create. But though he be a man of a creative mind. He saw no skill to be improved in what he found desirable. Nor did he find himself worthy of any task life has to offer.

So, he found himself working a dead end job in construction, doing medial labor. The work few wish to do for the scraps of the construction industry. From a far, nothing seemed to look promising; except the ability to eat at his favorite restaurant every week upon pay day.

But quickly the scintillated novelty of dining out every week became dull. Wearing away like unpolished wooden floors. So, one day staring through the grime riddled windshield of his truck; a thought skirted through his mind.

Instantly, his dismal point of view and lethargic life became struck with aspiration. Unbenounced to him, a smile streaked across his face; as the drizzle of rain meagerly rinsed the layer of muck from the windshield.

He then pressed his foot to the pedal, returned home from work and announced his plan. He decided to join the Army, to become what he was not. A strong, independent man with a warriors mentality. Hoping this choice would design him to be unstoppable in the world.

To bring him the confidence he always wished for and to bring him purpose to his ever so dwindling life. But of course, such a decision was met with resistance from family members. They poked and prodded to find reason for him to stay; even some friends said he would amount to nothing in his decision.

Yet, with all this resistance he still made the choice. He had never left anything behind in his life nor ventured far from family or friends. He wanted to fly from the comfort zone of his mind. Even if it meant signing away every piece of himself.

Upon the arrival of this courageous decision. Tears were wept, not only from family and friends, but himself. He was not fully sure if this was it; that he should do this. But his father spoke too him, saying,

"That no man will find his true strength in purpose if he only follows what is easy."
------
Thank you for reading, hopefully this inspired you in some way.

What dreams do you have that you fear to go after?
What dreams are others trying to tear you away from?

Let no one keep you from what you believe will bring you true life.

More amazing thoughts and stories to be found in, A Man's Traveled Heart
Coming soon, The Bleeding of Words