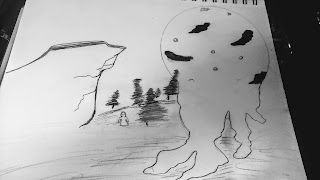 I woke to magic, to stars falling, to the moon rushing with water, and the trees singing. I stood still for only a moment, before I felt my heart leap. It struck my ribs; pulling me forward. I took a step, and as I did, the world around me became animated. The scenery entwined like a dream.

Colors flew from my fingers like beams of light. Cliff sides swayed like grass in the wind. I reached out, I touched the moon. The water upon it's rugged terrain felt cool. I cupped it in my hands and I drank it. Upon the touching of my lips, my tongue, I became clouded in sorrow.

But I could feel joy speak from these enchanted waters as well. As the water rushed down my throat; tears emptied from my eyes in silence. I knelt to the ground placing my hand upon the grass. As I did, it suddenly wrapped around my hand, but with a gentle displacement. It was as if it could feel my agony, like it knew my pain.

I carefully pulled my hand from the grass and glided it above. Passing my hand over each blade that reached beneath the palm of my hand; I sensed something reverberate in my bones. Like an echo in an empty cave.

I quickly stood, in the fright of what I felt. What I felt, was something only I should know; how could grass speak to me?
I looked to the moon, but it was dry, black, it appeared desolate from what it was. Suddenly a soft voice whispered from the distance. I looked down from the moon and there, between the singing trees and the swaying cliffs, was a figure. A figure of translucent white, it walked toward me as more tears fell from my face in stillness.

I began to feel my heart weep as the figure slowly approached me. I became fearful, yet felt comforted by its presence. As it walked toward me, tulips of glowing white sprouted from each foot print it stained upon the field. Whispers came sprinkling through the air as stars fell from the sky.

I watched with anxious curiosity and frozen bones. I could not look away , but from the corner of my eye; I could see the moon. It was turning red, I started to feel a strong heat radiate from it. Quickly the climate became a sweltering cough of heat.

My palms became clammy with sweat, but I could not move. The moon I could see, started to boil. It began to melt in the form of smelting slag. The translucent figure showed no signs of hesitation as it continued to approached. As it neared, I could feel it, it gave off a raw crisp aura.

I began to shiver, cold breath escaped my mouth. My heart, slowly coming to a deathly pace. My eyes drew heavy. But near its last few steps before reaching me. It screamed, shrieking into my ears like a banshee; its eye drew as black the night. Its body became darkness, the sky followed suit.

It reached me, but I could not move. As I quivered in fear watching its shadowy hand grasp for my face. It too became like the moon; red. It too boiled before my eyes and melted to the ground before me. Vanishing to the soil. Leaving a trail of black smoke as its eerie shriek faded to the open air.

I woke to magic, I woke to my skin, and upon my chest, a mark, from the figure within.
----
Thank you for reading, hope you enjoyed.

What is your interpretation of the story?! Please let me know in the comments below or at any of platforms.

Wanting to hold my words in your hands? A Man's Traveled Heart