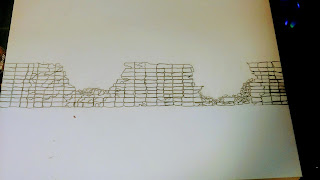 The walls come tumbling down. An instant feel of triumph embodies the people with great courage. Sands flare from the hands of the wind, rain begins to pour with heavy tears. Omitting no attention to the environment, the people raise up roars of freedom, of strength, and unity.

The sun glares enviously into the shroud of sand, but it can catch no view of the reckoning. The walls, now debris, sit with no command to force these people to the hands of malevolence. They storm through the openings of the walls, pressing themselves in the fury of sweeping victory.
Leaping from the rubble of the wall; the men bellow with command. They charge with furious bravery as they breach the doors of the palace. Not even the diamonds that lay patterned at their feet, distracts them from their mission.

The women and children, cheer as they watch from the courtyard of the palace. Seeking shelter from the wild winds and coarse sand. They hold each other closely beneath a mighty tree that stands sprouted from a fountain made of marble. Though, natures is being grievous, these terrible winds allow for the concealment of the people; as they bring forth the justice.

They are but ghosts in the throat of these barbaric landscapes and storms. For too long have they been the results of greed, of false lies and the outright thievery of its people. Leaders seeking the taking of others, in the fallacy to give equal. Only to take, starve and regress to the age of stone.

Leaving its people to the mouth of starvation, of disease, suffering, and hatred. Yet, in the misery of all this, today, after generations of brutal tyranny, they have come together. Now toppling the regime that had once promised the peace of all.

Only to be given the fruits of slander, of deceit.

No more though, are they feeble in their existence, they have finally grown taxed of their position. They have finally denounced that which they once praised. They have fallen free to their decision to be, to live, to be no more the sheep of evil.

They spill into the palace with the passion of freedom. No more shall they see the deaths of children, the coercion of family. Stringing lives as if they are but tools in the birthing of destruction. Their chests fill with breath, the men capture those who fled behind the walls of the palace.

They drag their nefarious ruler from his chamber. He struggles, screaming, pleading for his life, praying to his god. But such a man as he, one who orders the slaughter of any who stand or flee his words are executed, women, children, men.
Deserves no peace, as he is the one who brought hell to this once free nation. Cheering, the people watch in relief and excitement as all those who caused the endless massacring of their lands and the world. Now lay before them, crying, in the fear of death.

Thank you for reading, how do we maintain our freedom from being seized?