The Sirens are Ringing 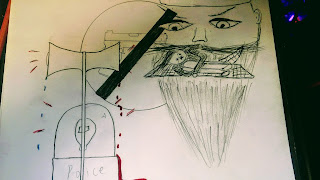 The Sirens are Ringing
(Warning, graphic depictions below)

The sirens are ringing, the loud speakers in the city are playing a single message on repeat. Though the voice that speaks from the static is calm, it holds an ominous tone.

"We are in a state of emergency; the city is under direst. Seek immediate shelter, lock your doors, windows, and if possible board them up. If you have weapons of any kind, arm yourself with them immediately.

We are under attack; the police are managing what their capabilities allow. If you are alone, and/or among the streets, please seek shelter now, do not force entry of any kind. As all citizens are on a state of alert, which may lead to accidental death in defense if forcing your way into entry. Be sure to announce your intentions and show that you are of no harm.

If you see any emergency response teams, please announce your presence as well and show no ill intent. They will support you if they are readily available.

Again, we are in a state of emergency, the city is under direst. Seek immediate shelter and safety!..."

As I listen to this unthinkable message, I feel my entire body become consumed in an anxious adrenaline. I feel, as if my soul is wishing to flee my body, but I hold to it. My instincts become rabid, I quickly dart to the nearest door; but it is locked.

I am alone, of all times to be alone, why today, why now?!

I see another door, I frantically sprint to it, but it is also locked. Fearful sweat pours from my brow. I hear voices in the far distance, hidden behind the mist that settled early this morning. From it, bleeds, chanting, screaming, and yelling. I can only image what violence is being concealed in the dense fog. I try to open the door once more, but there is no give.

I feel my heart beat with shock, ramming my chest like a drum. Panic grips my throat. There is no sign of activity in the buildings that surround me; even the lights remain off.

It's as if, everyone knew but me and had already fled. I take in a breath, gather what composure I can, I step away from the door and begin to yell for help. I announce who I am, I remove my jacket, turn out all my pockets to show I am of no harm.

I keep yelling for help as I looks around and as I turn my head to the second floor of a large black office building; I see a few faces peering from a window. I wave to them in desperation, making eye contact, they vanish. I continue to scream for help as I look around. The cold begins to take me, so I place my jacket upon my body. I start to walk hastily away from the voices that shriek from the mist.

My heart still racing, I find a small alley way, I walk toward a pile of trash that lay only a few yards in. I wildly look for a place to hide. But you can clearly see from either end of the alley and see that I am here. In my desperation, I begin to dig through the pile of trash and make a hole large enough for me to hide in.

The smell of the rotting waste is causing me to gag, I place my hand over my face. It masks the smell just enough to make it bearable. I finally make a hole large enough to hide in. I crawl in, with somewhat of hesitation. I keep an eye for any sharp objects as I carefully place myself inside the pile of filth.

Once in, I cover myself with the trash. Just as I do, I hear the voices from the mist come around the corner of the alley. I can hear the footsteps rumbling like a stampede. I hear murderous screams among them, screams you might hear in the act of torture. I can feel my curiosity wanting to look, but I remain faithful to the decision to hide.

Suddenly, I hear the voices swarm into the alley. Fear, begins to overwhelm my senses, not even the noxious aroma of the trash sickens me. But this time, I can hear them clearly, most are speaking a language I cannot understand. Some are speaking in English, chanting out words.

"Leave no women of the loose without consequence."

"Find those that have forsaken our god."

"We must cleanse this unholy ground."

My heart pounds heavy as I listen to them speak. I can see figures pass by me through a tiny crack. I see them carrying weapons, guns, knives, stones, and sticks. I see women being dragged and pulled by ropes tied around their necks like slaves.

As I watch in horror, I pull small pocket knife from my jacket. I carefully unfold the knife and embrace it in my hand. It is all I have to protect myself, what will I do, I do not know? I am becoming ingested by fear. My hand gripping tight around the knife, my heart exerting itself beyond my reality.

Holding the knife, I feel some relief. But as I sit here, one of the men holding a gun ceases movement and positions himself in front of me. He shouts and points down the alley, as if to command. After his shouting, another man approaches holding a pistol. The man with the pistol starts to pull on a rope he holds in his left hand, three people appear, all tied to the same rope.

The man with the pistol begins to shout at them, flailing his pistol in their faces, they kneel. All three are facing the alley wall. I speak to myself quietly as I watch the hell before me unravel. I can feel my body tremble in terror. My eyes, locked to the horrors before me.

With no warning, the man with the pistol fires three consecutive shots, each into the heads of the individuals tied to the rope. I gasp and quickly cover my mouth. I am lucky as they do not hear me over their shouting. The men leave, they do nothing to conceal the atrocity they just committed. I watch them move on; as if the murder they committed was righteous.

I sit, now staring at the corpses before me. I begin to think with a petrified heart.

What have they done to deserve this? What has this city done? Do we not welcome all with open arms, do we not allow the expression of all? Why is this happening? These questions cloud me, I never thought it would come to this.

I knew they already took a few small towns, but never did I think they would take a whole city. I must stop my useless thinking and figure out my survival, there must be something I can do. As I begin to think, I hear the mob of violence dissipate. A strange silence clings to the now empty and hollow streets; a silence, I cannot explain. Even the loud speakers are mute.

I wait a few more minutes and then remove myself from the trash. I stand up and look around. I see the three dead before me, one a child, no more than sixteen, a man in his mid twenties, and an elderly black man.

My stomach knots as I stare at their bodies. The younger man is draped in a rainbow flag, the girl, you can see had been forced upon. The elderly black man, appeared to be just an unlucky man; in a scenario that could have been prevented.

As I look at them, tears fall from my eyes. I look around and see what appears to be a torn sheet laying in the trash. I take it and cover the bodies of these poor victims murdered by the hand of malicious hate. Upon covering the slaughter, I raise my eyes to the wall. I guide them up; there, just a foot above my head, is a sign and some words below it,

Below it are the words tagged,

"Stop the violence, hate speech is not free speech"

Oddly, I remember when this was tagged, I had been walking pass this alley that day and saw a group of young kids tagging the wall.

All this could have been prevented, but we failed, and stripped our people of their defense.
-------

Are freedom speech and the right to bear arms important you? If so why or why not?

Wishing for more, then get you a copy of A Man's Traveled Heart