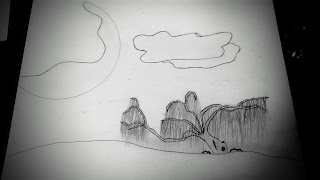 There, at the edge of the dirt road upon this solitary night; she stood, silent, gazing toward my vacant existence. She stood beneath a willow tree, that held itself at the foot of the river. And there, our eyes met with fervor. Hers, shimmered like the lighting of the moon, cold, alone, but mesmerizing.

And as I stared, I was drawn, like that of new found doe to its mother. I craved her like the succulence of fruit. I felt her presence pull me like gravity, waving me in, towing me out, like that of an evening tide.

And as I approached, I felt this brisk summer night, begin to caress me with warmth. A dry warmth I should say, a warmth, I had never felt before. With each approaching step I became deeply enthralled in this curiosity of what forges such heat, on such a raw bliss-less twilight.

And as I loomed my hollowed bones toward her, the warmth began to rise. Sweat seeped from my brow, but I pay it no mind. For it deserved no regard of mine, for before me, was something of the unknown. An attraction I had never felt. And my lonely soul begged for even an ounce of love, it would even settle, for mere pleasure from another.

And as the heat rose, my eyes became utterly charmed by the force this woman radiated. I was fully enchanted in the investigation of who she was. My lips became dry, but my tongue tingled with pleasure of something savory. It was almost as if the air itself was the breath of ripe berries.

But when I stood only a few yards from this sublimely mystical figure. I began to see something form upon her head. Fear began to rise from the deepest parts of my belly. A fever engulfed my gut, but I gave no thought to stop.

Even if I wanted to cease my approach, it was too late. I had led myself to the hunger of my weakness. And with my bewitched eyes, I looked upon this woman's mane. And their, a top her head, laid a crown, and from that crown, her head sprouted horns.

And with no capacity to relieve myself of her presence, I was submerged in the flooding of fear. My lips became sewed to the command of the devil before me. My soul wept upon the discovery of deceit. And I fell to her kiss, her rouge lips, and her sinful eyes. For I became a fool to the wishes of thoughts I praised inside.
----
Thank you for reading, what have allowed yourself to fall for?

If you have the courage to read more, please purchase a copy of A Man's Traveled Heart