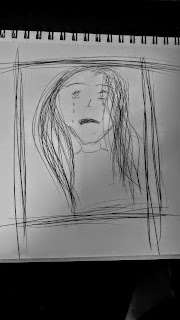 Three children and alone, abused in the last torment of what she thought was the opportunity of blooming lilies. Hoping to string them across her neck in the display of artistry between her and the love she had for her relationship.

But quickly were the flowers trampled on beneath her mans lack of self-esteem. Bridging his hate for himself upon her and her children. And oh did he show it well, his hatred for himself. Sly in his words but weak in his actions. Raising his hand not only to her, but to the children. Leaving bruises, welts, eyes that would bring one to shiver upon seeing such brutality.

His ever so false chivalry would play well after the fact. Creating his sorrow to be theirs, reaching for forgiveness but with horns. Hiding his scars, creating the children to be a burden to his wealth and his mental well-being.

Nights would pass and not a single plate of food would be served. For she had no job, and his tongue would speak ugly to her own esteem. Bleeding her of any hope, spraying the thought of no career is  undeserving of suppressing her physical hunger, of feeding her children.

Starving till the hunger would rip their guts. The discomfort of the children could be heard in horrific tears. Only to be shouted down by him, to be placed in a closet to be silenced. And she would fight, she would do what any loving mother would do. Place death at her heels if she must, to protect the offspring of her heart.

But too weak was she, the hunger, the battered skin, the broken bones, an unsound mind. She was lost, hopeless, so she played her best. Being the lover she hoped would calm his wretched heart. But nothing worked, tears would be her pill for slumber.

Late nights he would come home drunk, stumbling not only on his feet but his words. And these were the most fearful days of all. For he had no conscious to hold back. His rage was relentless, there was no ceasing his dreadful actions. His drunk boisterous voice would bring screeching fear throughout the house.

The children would hide beneath their beds, caring for each other in heated desperation to survive. He would knock all contents from the counter and table. Throwing bottles, flipping chairs, speaking how ungrateful she is, how wasteful the mere presence of the children are.

Her heart would fall into the pit of her gut, feeling as if she is falling from the highest cliff, never to land. Only to fill comfort upon his drunken self to pass out. Rushing to the children to hold them, to apologize for the chaos she has fallen for once again.

But one night, in the far reaches of her soul and upon his most drunken night, she grabbed the hopeless and turned it into fire. He was too drunk to even take a swing. His eyes stared beyond the walls of the home, his voice unrecognizable, he came home tumbling like a fallen tree to a storm. He laid dormant, snoring to the pattern of his congested chest. And she approached him carefully, checked to see if he could hear her. But he did not move.

And in his stupor of drunkenness, she grabbed string she would use for her crafts. Grabbed his hands and feet and wrapped them as if he was pig waiting to be set for a feast. Once she felt he could not escape, she raced to her children, filled her arms and guided the rest out quietly.

And the night consumed them, but it brought hope and never, did he find her.
-----
Thank you for reading, Thank you for your support, I hope this tugged at your heart.
If you wish for more, please grab a copy of A Man's Traveled Heart
Follow me on Facebook and Twitter for daily and unique poems to each platform.