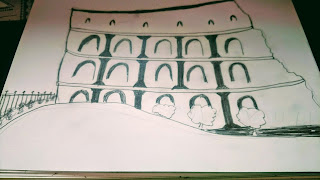 A man, torn from his life as if he were a rat infesting the dinning of a king. Captured, thrown to the beasts for entertainment. His family, lost to fields of wheat and the unfortunate greed of men. Surrounded, his heart bears no resemblance of who he was.

Stained in the blood of strangers, survival is a must. Cheers are the only constant in his life, the uproar of crowds. Sweat brows his eyes as sun basks in thickened heat. His throat dry, but his soul beats, though weak in the bared living he has now.

He must not kneel to the fear before him. For he is still a warrior of his breath, giving no solace to his enemies. Though they wish to reap the same award, a life of freedom. A severed head rolls from a mighty swing of steel.

The air cut with a whistling of blades. The rumbling of the crowd silents the struggles of the men pitted in desperation to live. Men with seething teeth of gambling stand in intensity, as they begin to second guess their wager. For this new gladiator is not of normal pretense. He stands with skill, his blade of a soldier, his eyes hollow in the face of death.

He is no fool to the unexpected. He is no jester the thirst of blood, narrow not is his vision. Leaving no moment open for the enemy. The king sitting displeased as his best becomes but a toy. No new blood as been drawn.

The kings best is planted to his knees by the swift finesse of this new gladiator. His eyes drawn to the severed head before him. His breaths shallow, his sword held in exhaustion. The man raises his blade, looks to the king.

The crowd shouts in ovation to see death. The king raises his hand, and gestures the death of his best. And in no hesitation the new gladiator, drops his blade with accuracy, severing the head of his enemy.

He drops to his hands, the crowd rages with applause in delight as blood pours from the headless body. But the winner, the man, finds no comfort in the execution of his win. But the king applauds him as well, and men rush to his side and force him to his feet.

Weak in the fervor of sorrow, he places his eyes to the king with a tilted head. Showing no desire for more, but the king pulls from his pocket, the names of the gladiators family. And before the champion could speak, tears fell from his face. And he replied to the king with tearful and anxious tone,

"Where are they my king, are they safe?"

The king smiles, placing the list upon his table,

"Yes, they be alive my champion. But you shall not see them till I say you have fulfilled the contract as my greatest gladiator.

And for three more years, this man remained a prisoner to the king for the mere pleasure of death.
----
Thank you for reading, what is your guess of what inspired this piece?

Looking of for more poetic adventure? A Man's Traveled Heart
And you can get more with my multiple daily posts on, Twitter and Facebook
Find me on YoutTube as well