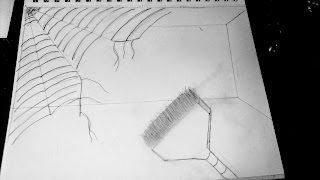 A splendid rapture of the soul can lead one to become well. To cleanse the envious toils of the heart and mind. Rinse clean the absolute disgust the recedes in the darkest crevasses that one fears to reach.

We carry cobwebs that need to be brushed. But we fear them, as they look of webs. A dwelling for eight legs and venom. Ignore them do we, fearful watching as the wind sways them delicately. Clean them? But what if a creature lives within them, ready to kill what life we have left?

Well so be it, at least an attempted to become healthy in spirit gave you hope to become something new. Clinging to filth is nostalgic, memories riddle the old. We hold dearly as we angst they may be useful later on.

But when has a cluttered heart of antiques led one to be profound in themselves? By all means keep the scars of lessons, but do not hold tight to what only brings burden. Scratch the regret from the mind and polish it for something greater.

Too often a mind becomes a place only for the instinctual. Hiding behind every wall from any ounce of pain. Rejection favors most, leaping behind what they already know. Only later to be traveling down the same road. Wondering where they went wrong, it was in the doubt of killing the old. Of tossing the lethargic ego that stood bold. But was only an Oz behind a curtain. That led them to fall meager to the world.

I too am guilty of the pleasure of a weak ego. But many times have I killed it before, only to see it grow back. But each time I pull it from its roots and bleed it dry. Always keep your eyes on your garden and keep a blade near by. For many roots become vicious and strangle the beauty that grows inside.

There is no perfection, but one can strive to keep themselves leveled and clear in the mind.
----
Thank you for reading, what cobwebs sit in your soul?