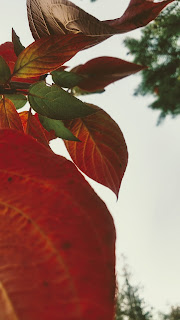 He is broken, found lying in silence on an autumn afternoon. Catching breath from the emptiness that shadows his every step, like the craving of the devils appetite to flesh. His eyes closed in search of peace in the ever rapids of his thoughts.

His breath leading into the air like a cloud of mist falling from the mouth of a beast. His heart heavy, his skin pricked by the crisp air that swallows the silence. The silence he finds to be ill fit for himself but finds this illness. To be slightly comforting in what mental health he does not posses.

And as he recedes into his mind with lonely and anxious speech. Like does a hermit to his home, someone knocks upon his air he breathes. And as a shadow skews what little warmth the sun is offering. He opens his eyes with slow methodical motion looking up to a shadowed figure that stands above. His eyes quickly dilate to the flooding particles of light.

And above him stands a woman, elegance. A woman with cinnamon skin, with lips basking in the brilliance of ruby. And hair curled gently at the ends like spiraling cypress. Waving in harmony to the motion of her body.

And as his eyes admire to this wondrous beauty, he loses all sight of the pain that slumbers upon his chest. He smiles with no presumed thought of doing so. The woman responds in kind. The woman, with amber eyes begins to speak asking to why he lays alone in a park, among the frozen air.

And the man response with hesitance about revealing his pity to such a wonder before him. And upon his completion of his answer. His gut pitted with anxiety upon the fear of what the woman would say. Dreading the rejection that would amply leave him in mindless turmoil for days.

And for a moment she stood silent, staring down at him with curious eyes. And as she stared while warily designing her reply. He closed his eyes once more, thinking that behind his eyes, upon hearing her response. That if  there is to be the expected collapse of a rejection, it would feel less invasive to his conscious being.

But it did not, it neither protected nor deflected what was about to come rushing from this woman alluring lips.

Still, his eyes remain closed as the woman responds. But she response unexpectedly with a smile and while she speaks she sits down beside him. She responds with kindness, with grace and understanding.

For, herself, she had been in this exact spot, doing the exact same animation of thought.

Trying to escape the ever rapid thoughts that consumed her like Rome upon the lands of Israel.

With this unexpected response he opened his eyes quickly, sat up smiling. He could feel something extraordinary, something undeniably beyond the existence of life. And upon this feeling, he looks over at the woman with some lack of ease. Stares into her eyes and sees something he had never seen before. Something he had never allowed himself to see.

A soul, a universe, a paradise of beauty he thought was only written inside the pages of old foolish novels of love.  And from this day forward, this woman, this man. Found harmony in the suffering they once allowed to dwell within as if to be a burden only of them.

When have you feared rejection or assumed that an outcome of something or someone would be terrible, before you gave it or them a chance?

Thank you for reading! Please grab a copy of A Man's Traveled Heart