Lies Are Our Demise 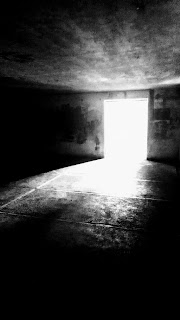 Stars stare with sorrowed eyes through a small window as night embraces with its dark silk skin. A man sits alone behind cool brick and a window that sits too high. His hands, his feet bounded by heavy chains but he will not defy. His eyes buried by black rings, like that of a raven’s eyes. His face torn by the weather's harsh kiss and the burdens of himself as he brews to the unwise. His body thin to bone, weak from his suffering, he was once king. But now lay a false man, cut from his throne, by the ill speaking of a lie. Too long, he thought it best to bury to the sands of time. To let it be swaddled by truth as if to mummify. But seekers of the past will always find.

He knows no place hide as the moon beams high, sitting in the sky with a prying eye. As if waiting for the confession of a crime. Its blue flesh shines brightly given view to the man’s paradigm. But the man sees no joy in the light of the moon or the eyes of the stars. He only feels the pounding of his heart, as it pumps him with life behind these bars.

His hands shake with grief as he looks to the sky, viewing what only he can see as he starts to cry. Between what separates him from the world he fills heavy with guilt but his tongue remains mute. His flesh sweats to the heat of summers night and still he will not be absolute. But no warmth covers his soul, only torment for what’s inside. And what’s inside, would leave all men petrified. But his lips sealed he will not speak. The guards arrive with mallet in hand, each step a squeak. Grasping with tense fingers, humming a sorrowed tune, it begins to consume. The man hears the stepping of guards, each wallowing like the sound of fingernails to chalkboard. The guards arrive with hands still clenched and the humming of a hallow chord.

The tune grows loud as the guards turn key. The man cowards to the wall, pressing with boned flesh covering his face with feeble hands as the guards announce themselves with the screams of a banshee. The brick does nothing to comfort the man as he sits hunched like coward.  His eyes closed as he listens to the screeching of the swinging cell door. Punishment swells his mind, his soul littered. Pale to the ailments of the mans gnarled truth.  Tears seep as the guard’s approach tickling the ground like a cockroach. The sound of whimpering ceases the guards, but only for a moment.  Their faces brim with ugly smiles. Maybe there will be voice to speak payment. They surround the frail man; his stench burns the air. The guards hum their tune foully while striking mallets against brick. Striking over and over till the sounds became like music. The whimpering of the man grows louder, he man becomes hysterical, but will not move from his wall. Do these guards not abide by protocol? The man screams with shame yet his lips remain sealed, his tongue still mute.

The guards continue their mockery of torment, looking to prosecute. A heavy pain weighs his gut like the chains upon his flesh as the guards smile madly with maniacal laughter and noise. The man shivers with fright but he will not speak. The guards stop, the cell grows silent, all that is about, is the anxious tapping of the man’s feet. The man hears nothing, he opens his eyes with caution. Lowers his hands and carefully peers between the darkness of the night. And in the darkness, stands the guards, silent, still. Looking down upon the man with conviction. Their eyes as black as the night and their flesh as rotten as death. One begins to hum, the man spazzes with fear covers his face. But the guards still do not move, they remain in place. Again, the man lowers his hands, his face fearful like a child. His eyes blister with sadness and guilt, his soul exiled. But still he will not speak, still his lips are sealed, still his tongue is mute. The guards begin to grow, expanding like balloons, their faces press closer and closer. The man feels his silence grow root.

The air begins to grow thin, sweat drips from his body like the ringing of a towel, no time to refute. His mind spins with affliction as his heart speaks of persecution. The guards begin to speak loudly as the humming of there the tune echoes in the chamber with pleasure.

Like my original work, want to take your soul for an adventure?!  Then Grab yourself a copy of my book, you won't be displeased.
A Man's Traveled Heart   👉     http://amzn.to/2w8astf
denial facing fear lies mistakes poet poetry seattle short story thank you why do we lie writing is difficult
Location: Everett, WA, USA