You burden me further as if nothing to omit.
We must talk behind closed doors with a watchful eye.
My soul unlit.
Where have you gone and what have you done….
Why have you made it here,
I feel echoes of my voice as if to be falling in a mindless pit.

I think what hell this has become.


Numb, as I sit.
Where we must sit, I sit, we sit.
Locked in a room and you lost in it.
This heart I had for you, lost.
I try to find it.
I try to cast it.
But the connection is no more, it has split.
Please let me rest and place you no more as a burden upon my chest. 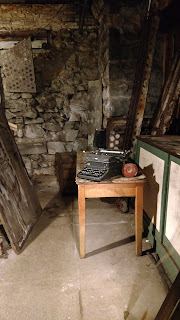 It was no more burdensome from the first call or the second, they were both a tell-tale of mistreated life. His heart split, but only for a moment, as if he knew one day this would come. His eyes piercing the walls of his room as the voice on the other end continued to drone. It always seemed this was all destined to fall, to collapse like tyranny. Far before this call there was endless days of waiting and watching for it all to change. But all that could be done was nothing, his words never seemed to find way from his mind, too young he felt to make change and without the fright of consequence. Time went on and the same days played out, it was like a movie playing on repeat. You wanted to turn it off, but you were half way asleep. Those times from the past up until now, sadly, gathered this child for this moment and time.

Nothing felt alright about how this man felt, but nothing felt like it was the right for this to happen, especially tonight. All things were going right, he was moving forward in his life. And this call, this moment, was another obstacle he would have to fight. But this obstacle, was nothing he had ever had to fight. As days passed he smiled hoping for it all to go away. To never exist to never have been brought to life. But choices were made and words were spoken that could never be taken back. He prayed for a better time but it never came about. The struggle continued from the roots of their past, from the roots this call had sprouted.

Too many times had he tried before to make it all change as a young man, but all failed in attempt to reach an ear. With each step to help, with each word of hope, it was faced with screams of denial and self-loathing. Pity filled the lungs of the caller like tar from the streets. At this point, the man wondered what could be done if anything? All of this, this moment, was from the continued creation of lies. The continued tongues licking up the savored taste of bloodied wounds in hope someone would see and feel pity for them. But oh, be the dirt of lies to suffocate any hope of change as lies spiral down the throats of those drinking to the pain. There is no hope for the changes of wicked actions without the acceptance of one’s malpractice of self.