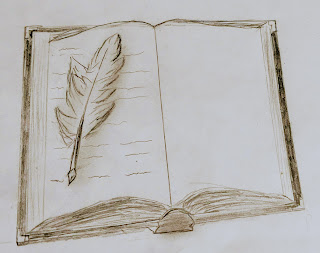 Okay, well, I am near done with my second book, I have one last story to complete. Maybe another 10,000 words or so and I should be done. But, its so fun writing this story, I cant stop writing and I have already gone way past my word count goal for this book! I have been writing non stop with this last story, which is continued from the first book. Been writing so much my fingers started to cramp up the other day. I had to take a day off from writing in my book it was so bad. I have never had that happen in the past few years I've been writing. It was a little painful but it was awesome, it was great to feel some pain from my passion. Having that small pain really showed me how powerful I can be in my passion. That writing is not just a phase in my life but a true part of me. Its now oxygen for my soul, it isn't just for fun, its for living. Where this writing and creating will take me, I do not know. And that, is the most exciting part ever. Maybe it wont take me anywhere, maybe it'll take me to the moon. But either way, I am happy to have writing in my life. I am happy to be an architect of imagination. There is nothing quite like making something come to life from scratch that you get to share with the world. Its frighting though at the same time, I get worried about how people will feel about my writing. Then, I remember I don't give a crap if people don't like it. All I care about is those that enjoy it. Writing is what I do and it is me to my very core. Its the blood that runs in my veins and the air that fills my lungs.


My architecture is no joke, I may not create buildings but I create worlds, universes, in the palms of hands. I bring emotion to the heart to the eye. I build each character, each plot, each twist by stacking letters together to create the framing of a word. And those words become the framing for sentence and the sentences become framing for paragraph. And the paragraphs becomes the last layer for the page. And when the page is complete, that's one floor completed of my building. And that one floor now has occupants. It has characters, life, and meaning. And the completion of my book, is the building itself. Its a building you and I can take anywhere and live in it whenever we choose, where ever we choose. Whether it be in a small dinner or a mile in the sky. There is no limit to where you can take the architecture of a book. Its more than just words inside a cover, its a creation. Its a building, a world, a universe, a lesson, a mistake, a cozy moment by the fire. Its memories that can be shared, its thoughts that can be discussed. A book, my book, anyone's book, they are more than just words with thoughts that someone slaved over to make. Its them, its us, its the authors blood, sweat and tears. Its sleepless nights and grand ideas coming together at the most inconvenient moments.

I never would have thought I would have found myself diving into writing like I do now. Like I would dive into a meal. Going all in and taking every bite and leaving nothing on plate to be tossed aside. Writing has encapsulated my imagination and has made it real. My ideas no longer just bounce in my head to talk among myself. I now express them for the world to share, because who knows what my words can do for others if they have done so much for me? Writing is glorious for me, its incomparable to anything I have felt before. The euphoria of writing gives does not just last for an hour, a day, it can last for weeks. Yes, I have to take a break for my hands and yes I may fall behind so I lose some of that euphoria. But, writing is far beyond the pleasures of fun nights drinking, the vacations, or the rush of snowboarding down a mountain as fast as I can. Its a stimulation that brings all parts of me to life in a rush that envelopes my soul. Its goes beyond the physical and reaches the metaphorical of my very being. I may be crazy for saying this, but who wasn't crazy that did the amazing?

And this final story in my book, I dreaded writing it so bad at first. I am a very creative person so I get bored quickly if I cant move on to the next idea and start something new from scratch. And carrying a story from my first book to my second felt like a huge mistake until I looked at it differently. Instead of looking at it like a continued story, its a whole new story in itself. It contains a new world, some new characters, and a new ending. Its unwritten, so everything I do to it, is from scratch. And when I started to write and realize that, I could not stop. I  keep feeling as if I have not written enough for it. I fear it may not live up to the first part of the story. But again, much like life, everything isn't exciting at all times. Maybe this story will be dull to some, to all, or maybe not. I do not know, I should not care. And when it is finished I wont. Just like my first book, there was so much fear of releasing it. It had endless mistakes but life has endless mistakes. And that is what my books are about, life, mistakes, struggles, suffering, getting through the hard things in life. Realizing that it is okay not to know the future. Knowing would be so boring, we would never make any real decisions in life. Now, I am excited to finish this story and find out what the readers, hopefully one of them will be you, who is reading this, think and feel from it. And I am not looking for the readers thoughts of approval, but their thoughts on what they felt from it, what they got or didn't receive from it. I wont to know what the readers thinks of each character and why. I want the reader to talk and think as if each story is part of them. That their is something each story holds for them, that each character has something to offer them in their life. But, no matter who reads it though, I hope they enjoy it, at
even a fraction of how much I enjoyed writing.
biography create don't quit pain passion poet seattle short story Why I write writing is difficult
Location: Everett, WA, USA